Victorian health authorities have reintroduced some Covid-19 restrictions in Melbourne after the cluster of cases linked to an outbreak in the city's north grew to five. 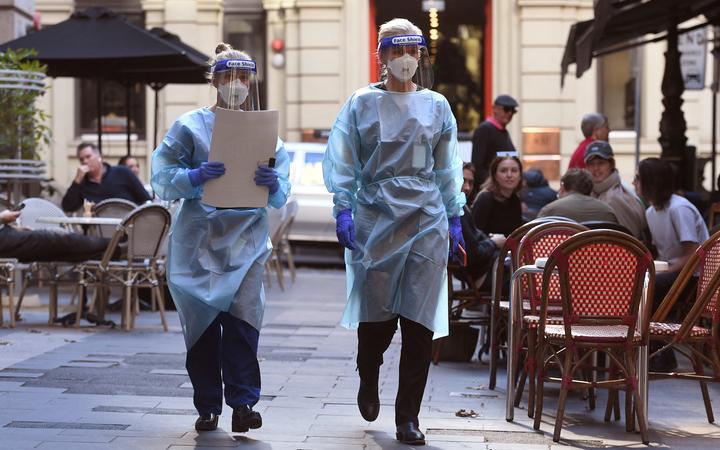 Health department officials arrive to inspect a restaurant and bar in Melbourne on 12 May, 2021. Photo: AFP / William West

A man aged in his 60s returned a positive result this morning, and has been added to the four cases reported yesterday.

Acting Premier James Merlino said the man had symptoms prior to the first identified case, suggesting he could be the possible source case for the outbreak.

"It is as infectious as any other variant that has been reported historically, so it is by no means want to be complacent about," he said.

Meanwhile, New Zealanders who have visited Melbourne since 11 May are being advised to monitor themselves.

The cluster has prompted Victoria to reintroduce measures such as the mandatory wearing of masks indoors, and limits on both private and public gatherings from 6pm today (local time).

The restrictions will be in place until at least 4 June.

More than 14,800 test results were received yesterday, and 8269 vaccination shots were delivered.

Merlino said the new case was a close contact of the first case in the cluster to be identified earlier this week, and was urgently tested.

"Importantly, he reports being symptomatic before case one developed symptoms, meaning this could be a possible source case," Merlino said.

He said after "early investigations" the case had not been linked to any of the exposure sites connected to the Wollert case that emerged two weeks ago, involving a man who had left South Australian hotel quarantine.

"But importantly the genomic sequencing has confirmed that this case, these cases, originate back to the South Australian hotel quarantine outbreak," he said.

Sutton said the latest case "may be the missing link" that connects the Wollert case to the cluster of four reported yesterday - but no point of transmission had been established yet.

"His initial recollections don't overlap with any of the Wollert case's exposure sites, so there's no definitive link to that Wollert case even though we know that there's a genomic link, so there may still be another intermediary," he said.

"We need to explore that, but we need to finish the very lengthy, very detailed interview with that case this morning."

He said the newest case had an appointment with the first of the four cases reported yesterday.

"He was symptomatic at the time of that appointment and the transmission probably occurred on the 18th when that happened," Prof Sutton said.