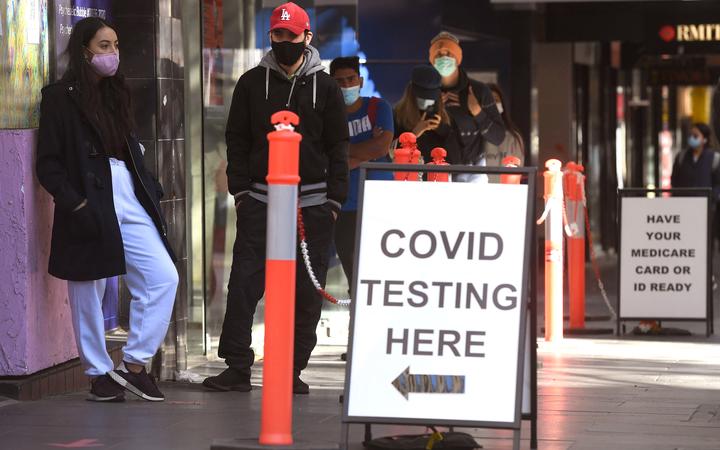 Three of them are close family contacts of the initial case, whose source of infection remains unknown.

The first case was a man who showed symptoms of the coronavirus on 20 May. He got tested two days later on 23 May.

A male relative went with him when he got tested, and that person - who was not showing symptoms - had also tested positive, Foley said.

Both live in Whittlesea, in Melbourne's outer north.

Two other relatives, a woman and a preschool-aged child, were also tested and returned positive results.

All were close contacts of the first case and lived in two different households.

They include the Jump Swim School in Bundoora between 8.55am and 10.15am on 21 May and Highpoint Shopping Centre between 5pm and 8pm on 20 May.

Anyone who attended the school or shopping centre at those times was asked to get tested and isolate for 14 days.

Foley said the outbreak was a concern.

"After about three months of no community transmission ... this is a reminder to all Victorians," he said.

"This is not over. We're a long way from herd immunity.

"This is a wakeup call to all of us to follow relatively minimal public health issues."

Foley said health officials were working on the theory that the outbreak was linked to the Wollert man who became ill in early May, but they needed the results of genomic sequencing to firm up that link.

That man arrived at his Wollert home on 4 May after completing 14 days of hotel quarantine in South Australia, before testing positive on 11 May.

He lives in the city of Whittlesea, which is where the new cases come from.

"Given the proximity of the gentleman from early May, who returned from hotel quarantine in Adelaide, who lives in that city [of Whittlesea] we don't rule out the prospect that there is a link," Foley said.

"The dates don't line up immediately so we can't rule out that there's a missing link out there.