Two police officers, one of whom was off duty, were at scene of the stabbing at a Dunedin supermarket and were among those who stepped in, police say.

The 42-year-old man accused of stabbing four people at a Dunedin supermarket was remanded in custody after he briefly appeared in the Dunedin District Court this afternoon to face four charges of attempted murder related to a stabbing attack at the Countdown supermarket on Cumberland Street yesterday.

Among those attacked were two Countdown staff and a Corrections officer.

Witnesses described the incident as "terrifying".

Southern district commander Superintendent Paul Basham said two police officers, one of whom was off duty, were also at the supermarket at the time and stepped in to provide aid and support.

"The actions of those two officers and, indeed, all of the people involved - Countdown staff and members of the public - helped to de-escalate the situation and minimise any further harm."

He said he recognised the Countdown staff who first intervened and were the initial victims. 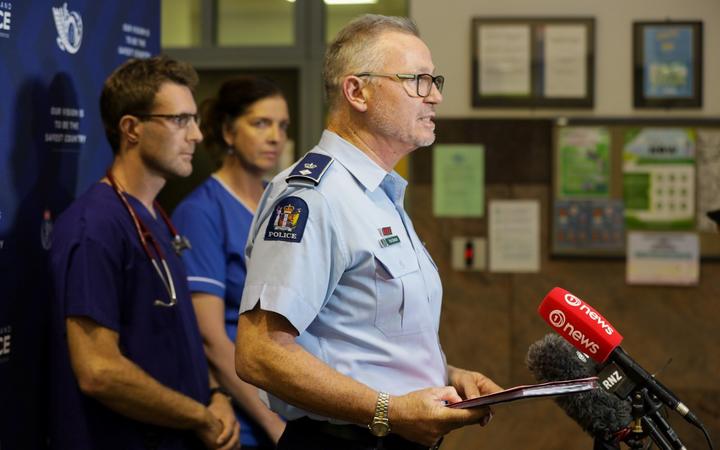 Knives used in the attack were part of the evidence collected, he said, and the public did not need to worry about their whereabouts.

Basham said police would not normally encourage bystanders to intervene in an attack and instead contact police, but he was reluctant to be critical of the actions of bystanders who helped yesterday.

"I think they all showed a tremendous degree of bravery and selfless sort of courage that I'm certainly not going to criticise them for... in this situation I think they were heroes."

Basham said he had met with Countdown team members and executives and they were working on a community impact plan. Countdown yesterday said there had been a dramatic increase in verbal abuse and violence towards its staff in the past year or so.

Basham said all four victims remained in hospital - one in a serious but stable condition, three in a moderate condition - and were recovering.

"This is a positive sign, however they have a long road ahead and we ask that the media respect their privacy at this time."

He said first responders on the scene provided a high standard of first aid that "almost certainly saved the lives of some of the victims".

"This was an extremely fast moving and confronting scene for everybody involved, including police staff. They all did an exceptional job when it mattered the most and I'm certainly very proud of my police officers."

"And of course the victims in this matter who remain front of mind ... we are currently assessing how best to support them and their whānau."

Southern DHB emergency department clinical director Dr Rich Stephenson said the response hospital-wide was excellent, and although the four victims all required surgery, they were recovering.

"We are pleased to say they are stable and improving with none still requiring intensive care ... we wish them all the best in a speedy recovery".

"Major incident responses are a team effort across multiple agencies and we feel privileged in the emergency department and wider Dunedin Hospital to be able to serve the community in this very difficult time."

Dr Stephenson said the DHB's thoughts and wishes were with those in the community affected and traumatised by the event.

"In the hospital, while we train and practice this sort of event, it nonetheless is a very challenging and stressful time for all staff and departments in the hospital," he said.

"We are also members of the community and we are shocked and saddened by this event on a personal level."

Investigation continues with accused to appear again next month

Basham said police today were examining the scene at Countdown and gathering evidence from the scene is a top priority.

"This includes photography, blood sampling and the collection of any discarded items"

They were also working to identify and talk to as many witnesses as possible, he said, and again appealed for anyone with any information including video footage of the incident to get in touch with police.

He said police still considered the incident to be a "random attack" and the motivation was part of the ongoing investigation.

Basham said the man accused would appear at the Dunedin District Court again on Tuesday 1 June.

"As the matter is now before the courts, police are not in a position to provide any additional details on the alleged offender."