A trial mass Covid-19 vaccination event is being planned for next month, Director-General of Health Dr Ashley Bloomfield says. 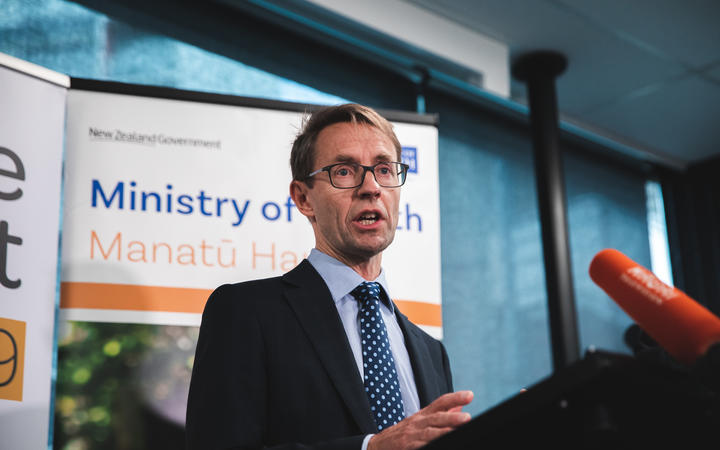 Bloomfield told Nine to Noon older people and those with pre-existing conditions were becoming the focus of the vaccination campaign.

Mass vaccination events were planned for when the programme was rolled out to the general population later this year - and a test run has been slated for next month.

"There will be these other one-off opportunities, we're doing some work at the moment on the sort of larger, mass, really large scale events.

"We're planning to test drive one of those in June."

Bloomfield said a new national vaccination booking system would be used to organise the event. He said it was being trialled from Tuesday in Auckland, and in Canterbury later in the week.

The public would be able to use it to book themselves a shot, while Healthline and medical providers could also use it to make bookings for people.

"Once the booking system comes in people will be able to not only see where and when they can be vaccinated ... but actually to make that booking.

"Now, that doesn't mean everybody will be able to get it from day one that it's available. It will require patience."

Bloomfield said the Covid-19 vaccination numbers hit daily records in the past week.

He said an update with the latest total weekly vaccination figures was due on Wednesday but the programme had ramped up since last week's total of 300,000 doses.

"It has further scaled up and I would say we had a couple of days last week where over 16,000 doses were administered ... around the country."

Bloomfield said daily numbers would stay around the 15,000 to 20,000 mark through June so as not to get ahead of vaccine supply.

There were still several hundred thousand does of the vaccine in storage and things were "pretty finely balanced" between now and June, he said.

"At the moment overall we are running slightly ahead of plan, but we're just making sure we've got that balance right."

Soon the programme will move to "group three" - the 1.7 million people aged over 75, over 65, or with underlying health conditions  - in that order.

Some parts of the country were there already.

"The smaller DHBs who have the infrastructure stood up are able to move more quickly into those population groups and just about every DHB now is out vaccinating in aged residential care settings, vaccinating their more vulnerable adults who are living out in the community - [and] those older folks living in the community."

The aim is by the end of June to have given out about 1.1 million doses.

From July, when large drops of vaccine supplies arrive, efforts will scale up again with between 40,000 to 60,000 daily doses expected.

Bloomfield said he was "very confident" the large amounts of the Pfizer-BioNTech vaccine promised from July would arrive on time.

"We've had really good support from Pfizer and they have delivered exactly as they said they would to date.

"We've used every lever we've got including the prime minister having talked directly to their global head a couple of months back."

40 percent of GP clinics and pharmacies to give vaccine

Bloomfield said he expected about 40 percent of GP clinics and pharmacies would be involved in the wider vaccination rollout.

He said clinics needed to be able to deliver 30 doses a day to be involved, while some said they did not want to be part of it.

"By the time we are really getting things scaled up in July there will be about 800 sites around the country where people can be vaccinated.

"That will include community hubs, GPs, probably around a quarter to a third of pharmacies around the country."

Health workers have been given list of underlying conditions

Bloomfield said the DHBs had been told which underlying health conditions would mean people should get an earlier vaccination.

He said an initial list was based on the conditions used to be eligible for the free annual flu vaccination.

The list was then updated and extended weeks ago with overseas evidence about underlying conditions.

He said the list would be further updated this week, and was available on the ministry's website.

Bloomfield said peoples' decisions about getting the jab should be made after discussion with their doctor.