A man who was at the Countdown in Dunedin when four people were stabbed has described the incident as terrifying. 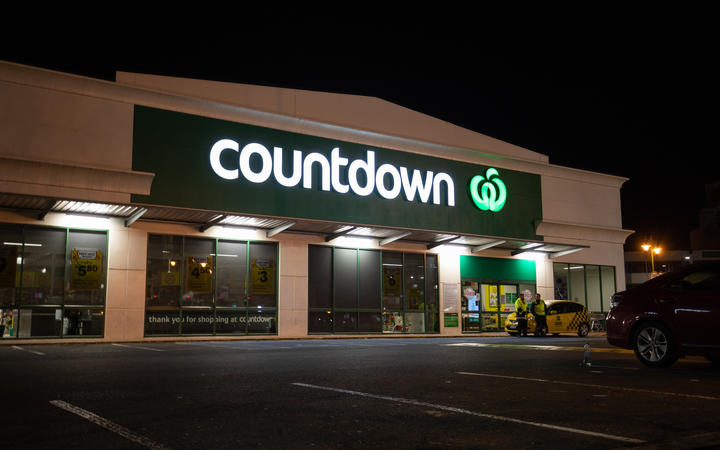 The attack happened at the Cumberland Street supermarket just before 2.30pm yesterday.

Police said three of the people injured in the stabbing are in a serious but stable condition in hospital after undergoing surgery, while a fourth person is in a moderate condition.

The suspect received treatment in hospital and was under police guard.

Customers and staff in the store disarmed and detained the attacker before police arrived.

The person had a minor injury, and police expect he will appear in court today. 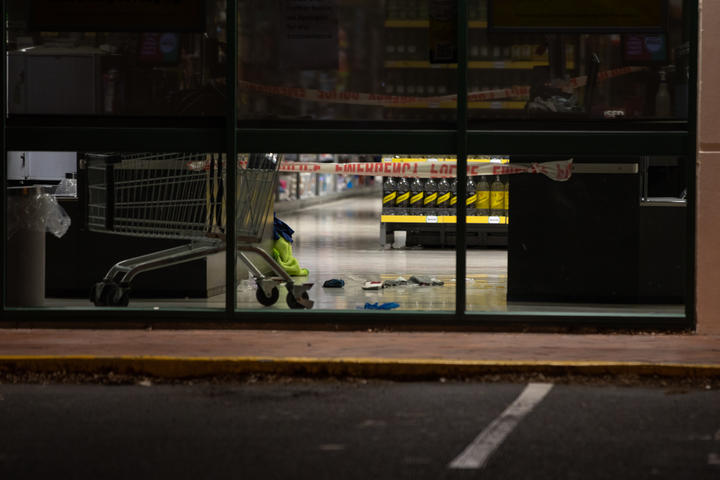 The supermarket will remain closed today as police continue with their investigation. Photo: RNZ / Nate McKinnon

An eyewitness to the attack, who asked not to be named, said he could not believe such a thing would happen in Dunedin.

"I heard screaming. At first I just ignored it, I thought it was just kids playing around," he said.

"Then I heard these shelves falling down. Then we saw this woman, she was walking. Blood, full of blood on her face. I think she was stabbed on her forehead or something," he said.

Not knowing what to do in the moment, he sheltered in a back room for safety.

"We wanted to help this woman who was bleeding, but at the same time we were really terrified and scared. And this man, I think he ran away and he stabbed another two or three people.

"Then I saw around five or six people on the floor, I saw just blood everywhere," he said.

Police yesterday said the investigation was still in its early stages and they believe it was a random attack.

Forensic investigators will be back at the Cumberland Street supermarket and it will remain closed today.

People with information, including video footage, were encouraged to contact police on 105 and quote event number P046456846.

Police said they were continuing to make enquiries and would provide an update regarding the status of the victims and the investigation this morning.

Countdown general manager of corporate affairs Kiri Hannafin told Morning Report the two injured staff were senior members of the team, and support was being provided to them and their families as well as the wider team.

"There were lots of people working yesterday and it was a really incredibly traumatic and terrifying event. They're not at work today obviously, and many of them are incredibly distressed and we'll be offering support to them but also to the customers in our store who were quite unbelievably heroic and saved our team without a doubt and intervened to protect them.

"Our team across our country have taken it very badly."

First Union - the union that supports Countdown staff - said staff were still "in shock and shaken up" by the attack.

The union's retail and finance secretary, Tali Williams, said they would be meeting with staff along with Countdown and counsellors to talk to the workers about support mechanisms available.

"Many of them have witnessed something truly horrific yesterday that will not leave their minds for some time and people just need time to recover.

"But for us as well, we want to make sure there's that ongoing support after today, that people get time off they need to recover both mentally and physically." 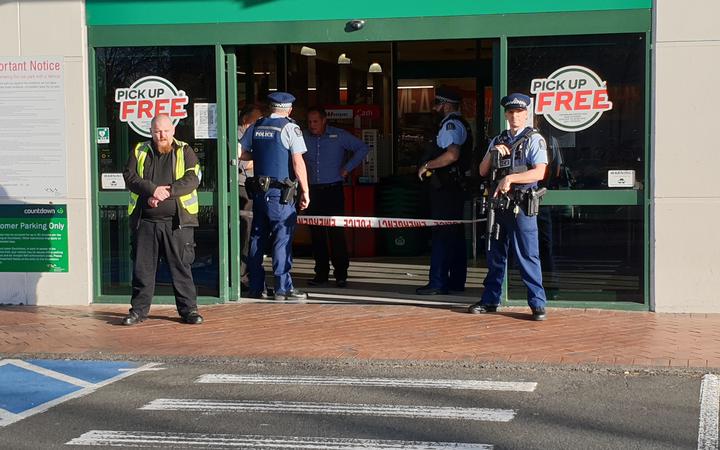 Hannafin said assaults on staff in stores had been increasing, with a 600 percent increase during the level 4 lockdown early last year.

"But since then and if you take away those six weeks, we've still had a 300 percent increase since 2019 so that's really significant.

"We're spending a lot of resources trying to work out the why and the where, and how we're going to deal with it but it's random, it's during the day, it's all over the country, it's not isolated to certain stores ... it's so difficult to control but it's not difficult to control your manners and being polite and to our team."

She said security had been increasing at stores month by month since last March, and while many stores have security all the time, others have them on occasion.

"We are concerned about both the frequency and severity of assaults in our stores.

"These threats to kill or threats to bomb or threats to injure our families and the horrific verbal abuse that our team get every day that's based on race or sexuality or ethnicity or culture, it's just hateful and frequent.

"I don't think I've ever felt so stressed about anything in my life in terms of what my team have to put up with everyday."

Williams said they were glad to see Countdown address the increasing abuse against staff, but workers needed to be able to have their input into solutions too.

"People at the frontline know what's missing and what's there and that's a key next step for us.

"Because they're witnessing this type of behaviour, and experiencing firsthand customer abuse, they are feeling a bit unsafe and they want something to change, they need to be a part of the conversation on what that looks like."

She said feedback they heard from staff suggested solutions like upgrade to technologies as well as security and staffing increase.

"But with the traumatic events that happened yesterday, really it's hard to know what can stop somebody like that in that situation."

Countdown also provided training to staff about how to de-escalate situations, she said. However, Williams did not believe that it would have helped in this particular event.

"I think for now it's really important given the immediacy of these events that people are just aware when they're in supermarkets, that supermarket workers will be tenterhooks, feeling on edge about what happened. So just take that extra measure to be kind and thoughtful right now to supermarket workers."

Dunedin Mayor Aaron Hawkins told Morning Report it was reassuring to know the injured individuals were now doing okay after the "shocking and deeply concerning attack".

He said people's attitude towards essential workers needed to improve.

"People collectively as a society need to think about how they act and treat people that are in service jobs and what that treatment of those workers does to enable and empower people at the more extreme end of the spectrum."

"We've been given no reason to believe there's an ongoing safety for people in the city centre."