Attorney-General David Parker says there's been no decision yet on a possible appeal to the high court ruling that some of the country's alert level 4 lockdown was unlawful.

Missed the Attorney-General's conference in reponse? you can watch back here:

Lawyer Andrew Borrowdale had argued the Director-General of Health Ashley Bloomfield went beyond his powers and put the country into lockdown unlawfully.

Three judges heard the judicial review at the High Court in Wellington late last month and their written decision has been released this afternoon.

Borrowdale had sought the court rule that three actions by the government in the early stages of the lockdown were unlawful.

The first was public statements made by the prime minister and other officials during the first nine days of lockdown, the second was regarding three orders made under the Health Act, while the third was about the definition of essential services. 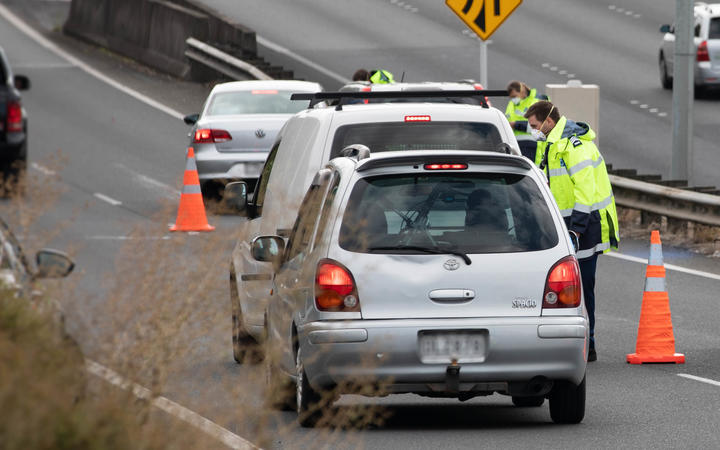 Police checking motorists going onto the motorway in Auckland during the alert level 4 lockdown in April. Photo: RNZ / Claire Eastham-Farrelly

The judges have concluded that from 26 March to 3 April, the requirement for people to stay at home and in their bubbles was justified, but unlawful.

"Those announcements had the effect of limiting certain rights and freedoms affirmed by the New Zealand Bill of Rights Act 1990 including, in particular, the rights to freedom of movement, peaceful assembly and association," the judges said.

"While there is no question that the requirement was a necessary, reasonable and proportionate response to the Covid-19 crisis at the time, the requirement was not prescribed by law and was therefore contrary to s 5 of the New Zealand Bill of Rights Act."

A new order was introduced by the government on 3 April which corrected that.

The judges said Borrowdale's other challenges to the lockdown and the early Covid-19 response had failed.

In a conference this afternoon, Attorney-General David Parker said there has been no decision yet on a possible appeal to the high court ruling.

The current lockdown orders made under the Covid-19 Public Health Response Act 2020 are not affected by this judgment.

Parker says the government does not think there are any consequences and was happy the Crown had in its view won the major points.

"What we were trying to do during those early days was take people with us from ... very few restrictions to ... very broad restrictions," he says.

"You can see that the court has gone to a lot of effort to record that this was an emergency... they just think things should have been written down a little bit more.

"In some way, the health act has been vindicated."

But where it was out of date was in the way decisions were taken.

"I would expect that when all of this has passed ... that we will have a look again as to whether the health act will use the format that is in the Covid response."

He was not critical of those who had brought the case against the Crown, saying it was an important issue and acknowledged the ability to hold the Crown to account as also important.

"We always thought we were acting legally all of the way through.

"The main point in this case has been that is was beyond the power of the governement ... that kept everyone in their bubbles and close businesses."

That had been upheld by the court, Parker says.

He cautioned against over-reading the judgment.

He says the issue with the first nine days being an oral request - rather than a former order - was cured by 3 April.

"We can be confident in the Orders made and enforced," Parker says.

"However the court did find that there was a breach of the Bill of Rights Act in the first nine days of the alert level 4 lockdown, because the original oral request for people to stay home and in their bubbles was not put in a formal order until 3 April.

"Importantly, though, the court found that the requirement to stay home and in their bubbles was a necessary, reasonable and proportionate response to the Covid-19 crisis at that time."