Auckland businesses want more done to attract people into the city to prop-up the local economy. 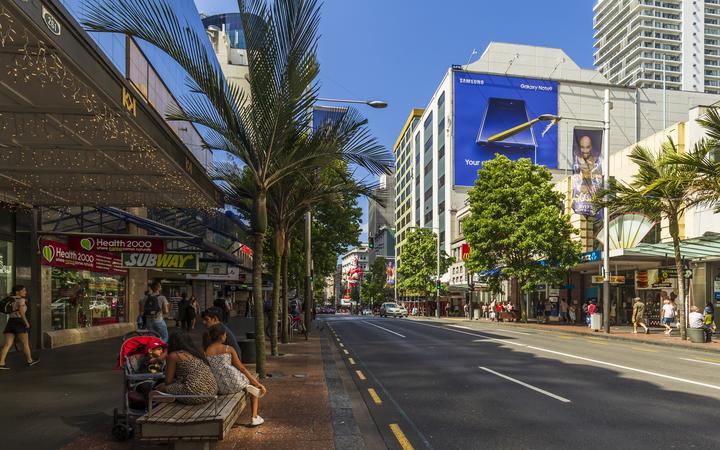 A pedestrian count in Auckland's CBD found food traffic was down by a quarter compared to last year. Photo: 123RF

Vacancy signs are common along the city's main street and some store owners fear it could become a ghost town.

"Out of all of the regions in New Zealand Auckland is probably struggling the most in terms of attracting domestic tourism," he said.

This was evident in the recent school holidays.

"Aucklanders left the city and visited other parts of the country which is fantastic for the regions but not the same degree of people are going to Auckland," he said.

"About a third of all tourism spend happens in Auckland and there's just reliance on domestic visitors. At the moment they're choosing to go to other parts of the country."

In good times, domestic tourism is worth $24 billion to the country - with a third funnelled into Auckland.

Now with international tourists gone for the foreseeable future, the focus is on attracting domestic travellers to Auckland's CBD.

A tourism industry leaders group set up to shape Auckland as a tourist destination is now working to market the city domestically.

This includes the government agency Tourism New Zealand, which usually markets the country to the world.

"They haven't ever promoted city breaks and that's something they're working on with Auckland, Christchurch, Wellington to encourage New Zealanders to go to a city for a break," Roberts said.

He said Auckland desperately needs a boost in local tourists to stop stores closing down.

Its chief executive Viv Beck said a recent pedestrian count was a quarter down compared to last year, mirroring spending which has dropped by 20 percent.

"There's a lot of discussion underway between organisations like ours and leasing agents and property owners around the challenges and how we can best overcome them."

Heart of the City has asked Auckland Council for an extra $250,000 to help market the city as a holiday destination.

"We're very focused on events that bring Aucklanders into the city and also that attract others from around the country," Beck said.

Beck said they are working to keep a good mix of retailers in the CBD.

"We understand that people need to survive and if there's a place to be leased then people will be looking to lease it," she said.

"We certainly want to keep up the recognition of how important it is to create a great place that people want to come to and have things that people enjoy doing."

It's not yet known exactly how high the CBD's overall vacancy rate is.

Figures from the commercial realtor Colliers International show office vacancies rose from an all time low of 4.7 percent at the end of last year, to just over 6 percent in June.

Retail vacancies are still being surveyed and will be released next week.

Its national director of research Chris Dibble said store rents have dropped by 10 percent on the city fringe and vacancies are edging up in the CBD.

"It is situated in those hospo and travel sectors at the moment and that's probably [reflecting] the difficulties in the retail sector with not a lot of spending going on during that lockdown period," he said.

A recent survey Colliers undertook showed two thirds of its clients intend to work from home one to two days a week.

"That Monday and Friday seem to be pretty popular for a lot of people to work from home so there still is a lot of discussion in regards to productivity levels," he said.

"If we've got more people back into office locations that will help the retail sector with foot traffic and people spending more."