From stormy seas to plain sailing, the America's Cup is prone to sudden changes of tack.

The regatta was due to attract a host of international tourists to our shores and give the economy - including local retailers and hospitality businesses - a big boost first estimated in the order of $1 billion.

Now it's anyone's guess, and businesses are hoping Kiwis will visit Auckland for the prestigious event and spend their dollars in the central business district.

Auckland business association Heart of the City has more than 10,000 businesses within its jurisdiction and its chief executive Viv Beck said sales are down almost a quarter.

Beck said businesses are holding out for any kind of boost.

"If Kiwis do decide that this is something to mark on their calendar, which we certainly hope they will, and we get significant numbers of people coming in, that will have benefits. It might not be the benefits we'd initially thought but that will have benefits for businesses that have been particularly hurt through this time," she said.

"One of the things we're trying to do is remind people of what a great offering we've got and encourage people to come in and enjoy it."

Although much of the city's waterfront looks like a construction zone, the America's Cup base platforms are finished and Team New Zealand's challengers are in various stages of building their headquarters. 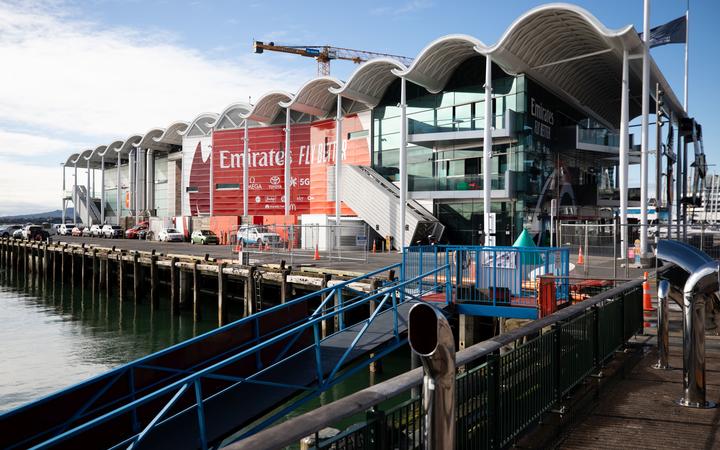 Completing the base foundations was a welcome milestone for Wynyard Edge Alliance - the team overseeing construction projects on Auckland's waterfront.

"It's great to see it coming together and big projects have their moments, every big project does. This has been a very successful project the Wynyard Edge Alliance has delivered a great outcome here on track. on time and coming in nicely on budget or under budget."

The council is forking out $113 million for the America's Cup, comprising $71 million towards building the team base and berths, $34 million for other commercial and base costs, and $7.3 million for event-related services.

Another $100 million is being used to accelerate big infrastructure works that had already been planned to upgrade Auckland's dilapidated waterfront.

Potter said the roads leading to Wynyard Quarter - except for Quay Street - would be clear of roadworks in time for the America's Cup World Series in December.

The famed roadcones on Quay Street, along the waterfront, will be gone by March in time for the main regatta.

"Quay Street will be substantially complete by the end of the year, there's some work that won't be finished on the northern side of Quay Street that will be finished in the first half of 2021," he said.

Without international visitors, the America's Cup will not be the economic turbo charge local businesses hoped for.

Three years ago the regatta's potential economic boost to the country's economy was estimated at up to $1 billion - although at the time that number was criticised as being overblown.

Now many businesses are caught in the headwinds of a global pandemic and international tourists are off the cards.

The restaurants and cafes at Wynyard Quarter will have front row seats to much of the America's Cup action - on and off the water - including Rush Worth cafe, which serves sailors from both sides.

Cafe manager Salama Lowe said she hopes the America's Cup events will bring more people into town but the spinoffs may be less tangible.

"Now that it's going to be a smaller event it's all a bit unkown but I do think it's a boost that is welcome."