American Magic, the first challengers for the America's Cup to have arrived in New Zealand, has had it's first day of testing in Auckland. 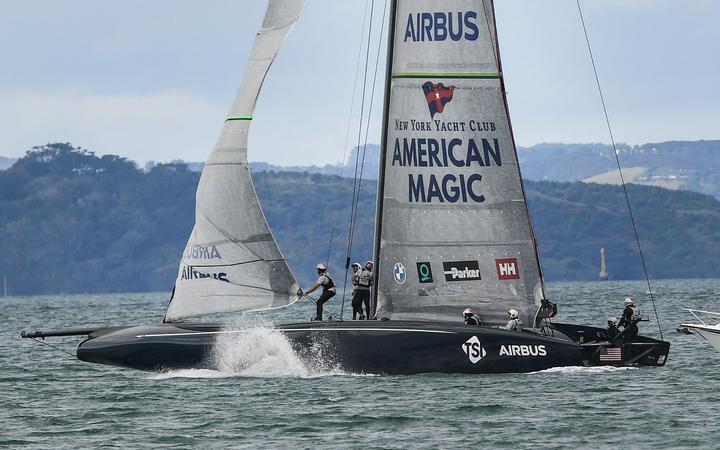 In contrast, three other challenging syndicates, INEOS Team UK, Italy's Luna Rossa and Stars and Stripes USA, have yet to arrive.

"It's just nice to be back to doing what we're meant to be doing," said Terry Hutchinson, Skipper and Executive Director of American Magic. "[Today we had] perfect conditions to be out in the harbor, and out in the Hauraki Gulf. It wasn't too windy, perfectly flat water. Reminds you a lot of Pensacola (Florida)."

In terms of the team's overall plan, Hutchinson said that despite all of the unexpected challenges brought on by COVID-19, the campaign for the America's Cup was on track. "When we started our planning prior to COVID-19, it always had us sailing in early August here in New Zealand," said Hutchinson after a valuable day of testing equipment and systems.

The syndicate from the New York Yacht Club arrived in late June after the New Zealand government granted them exemptions to travel to the country to begin their preparations for the challenger series early next year.

"Reliability and performance and and racing are all completely linked together. And with the boat [today], it was great to see everything working reasonably well. To bring it together as a team is a great effort by everybody involved. There were a lot of pieces to the puzzle."

"There is a high priority of sailing at the venue, of getting our team settled at the venue, and of learning," said Hutchinson. "A lot of us have raced on what is probably the main [race] course, and we're going to use that. But some of us haven't sailed on the other courses. I'm a big believer in being settled as a team and having us focus day in and day out on the sailing. Moving to Auckland at this stage has allowed us to do that."

The first edition of their AC-75 foiling monohull, named Defiant, spent much of the training session sailing around areas that organisers have designated as five potential race courses.

The challenger series for the Prada Cup runs from Jan 15-Feb. 22, 2021 before the America's Cup match against holders Team New Zealand begins on March 6.