The Northern Mystics made up for their loss to the Southern Steel on Sunday by beating the Waikato Bay of Plenty Magic 45-39 in the last of the centralised games in Auckland last night. 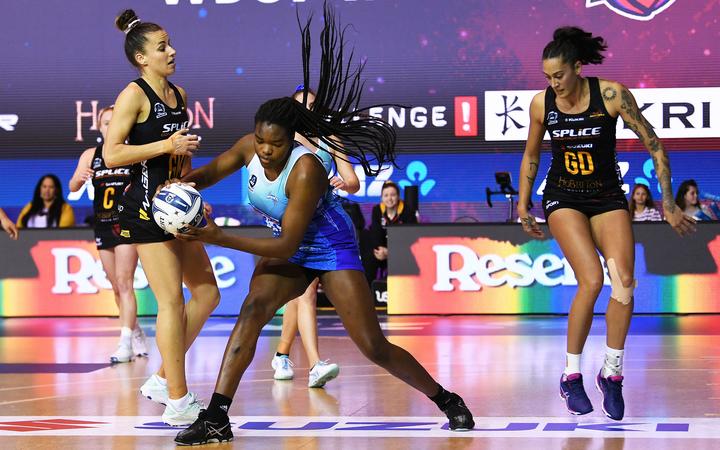 The Mystics finally broke away from the Magic in the final quarter as the connection between Peta Toeava and Grace Nweke burgeoned.

The win puts the Mystics just ahead of the Mainland Tactix in second place on the ANZ Premiership ladder, while the Pulse continue to set the pace after seven rounds.

The toss-up makes a rare appearance

The toss-up has almost become extinct in netball, with the preference for the umpire to make a call one way or another. But in the first minute of the final quarter last night umpire Josh Bowring couldn't separate a possession of the ball decision. Phoenix Karaka and Kelsey McPhee looked quite shocked when Bowring called for a toss-up. It may have been some years that either player had taken part in the act and the novelty wasn't lost on the players or the crowd. Given it's so rare, it's not surprising the players were hesitant when approaching it, and it's unlikely they practice it regularly if ever.

Trinidad and Tobago international Daystar Swift has made an agonizing sacrifice to be in New Zealand to take up her first professional contract. She's been separated from her partner and two-year-old daughter since January. As a result of Covid-19 the separation is heading towards eight months. An injury meant Swift wasn't available for three rounds but outside of that she's only had 50 minutes on court so far this season. Oceane Maihi, a Beko league player, was brought in as cover but has been the preferred option when coach Kiri Wills has looked to inject something into the defensive circle. It seems odd that Wills would use an import spot for a defender not hugely well known, given the immense defensive depth in New Zealand. Wills would have been familiar with Maihi's talents, given she's been in the Stars feeder team for the past three years and has shown she's more than ready for this level. The defensive depth is so strong that current Silver Ferns' development squad member Abby Erwood can barely get court time at the Steel, with Tanisha Fafita coming to the fore. If a coach opts to bring in an import player, surely it should be on the basis that they believe the player is good enough to be a starter each week, as is the case with Kalifa McCollin at the Steel.

The Pulse are making a habit of kicking up another gear in the final quarter when they are under the pump. The Northern Stars led the defending champions by two heading into the final spell on Saturday but the Pulse ransacked the Stars 16-4 in the last quarter to take the game 46-36. The Pulse did it to the Mainland Tactix the week before, when they recovered after being down by four in the final quarter. And in Round four the defending champions overturned a two goal deficit at three quarter time to beat the Southern Steel 47-40. Experience must be a big factor for the Pulse and the ultra-fit Katrina Rore and Karin Burger could also be a part of the formula. Rore and Burger are applying immense one on one defence and by the time the final quarter comes around, they must be wearing out their opposition.

Best combination of the round: Bird and Selby-Rickit

In the Tactix 47-40 win over the Stars on Sunday, goal shoot Ellie Bird shot a perfect 100 percent with her 37 goal effort. Te Paea Selby-Rickit put up 10 goals of her own and it was also her feeding to Bird that was a key ingredient to the win. It's a combination that's still growing and could be absolutely crucial as they fight for a place in the grand final. At the other end Temalisi Fakahokotau and Jane Watson will get turnover ball, and if Bird and Selby-Rickit can continue to improve and convert those opportunities, it could be a game changer for the Tactix.

Other results from the round: