The government has chosen the fourth-ranked of five options to run the next census. 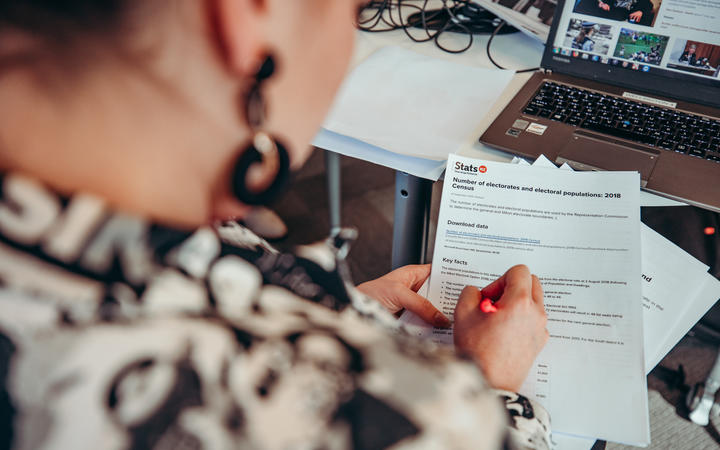 The option boosts funding by two-thirds compared with the roundly criticised 2018 census - which significantly undercounted Māori and Pasifika in particular - but to a level well below what its own experts wanted.

Māori say it's "insulting", and runs the risk of delivering a poor census for the third time in a row and entrenching unfairness.

Census 2018 was an underfunded debacle and Stats NZ has warned against using it as a spending benchmark.

Nevertheless, both the department and the government have been talking up the comparison between the $126 million in funding in 2018 and the $210m recently approved to run Census 2023.

However, Official Information Act documents show Stats NZ told the government in February this year, that a $210m census was only just above a bare minimum option that officials described like this: "For variables where no or limited administrative data is available to fill gaps (like iwi affiliation and language) the minimum viable option will likely only be able to produce poor quality data.

"There is a high risk with this option that the quality level could fall to very poor and not be fit to release," Stats NZ told Statistics Minister James Shaw.

Read Stats NZ's report to the Minister of Statistics on options provided to Treasury for the next census in 2023 (PDF 867KB).

Even so, the option the government has chosen was rated by Stats NZ as just the fourth out of the five options it looked closely at in what it called a "robust" and independently backed business case.

Read advice to Treasury on costs and funding options for the next census (PDF, 862KB)

By contrast, its top rated and most expensive option, the one Stats NZ recommended to government, had a $226m operating budget.

"Customers, Treaty partners and stakeholders have expressed a strong preference for this approach because it best meets their needs," Stats NZ told Shaw.

"It balances the need to maintain the current time series of data with a desire for ever-richer, high-quality data about small groups of the population. [It] delivers improvements to the wider data system."

The narrower, cheaper option did not. Stats NZ told Shaw in February it would not improve data quality or properly support key decision-making.

However, Stats NZ has changed its stance since it gave this advice before the 2020 Budget, and it now echoed Shaw when he said the risks, though high, were being well managed.

"We are aware of the risk and we are managing that risk," the minister told RNZ.

"Since the decision was made about the level of funding ... I'm advised by Stats NZ that they can deliver a high quality census, with high quality data, and those details for the sub-population groups.

"And if we feel by the time we get around to the next Budget, that that risk still exists, then we do have the option of scaling up."

But the cheaper choice has already led to Stats NZ setting its sights lower.

Instead, she hoped to perhaps top the 2013 Census response (92 percent nationally, 88 percent Māori and Pasifika, Asian 91 percent), by spending cleverly and if they could get a lot of community buy-in.

"The business case option that was preferred by Stats NZ was not funded - although this option would have delivered high quality data, it was significantly more expensive.

"The reality is there's only so much funding to go around.

"The reality still is that compared to the 2018 Census we've two thirds more funding available, we're going to be putting more than double the effort with census collectors compared to 2018, over half of the households in New Zealand will save paper forms right from the start compared to about 3 percent in 2018.

However, the OIA documents show iwi backed the $226m option that Stats NZ had recommended after months of consultation.

And the papers suggest the cheaper option would not be accurate enough to record iwi affiliations, or generous enough to rebuild partnerships with Māori as recommended by an independent census review last year - though Stats NZ protests that it is doing just that.

"This Cabinet has knowingly decided to deliver a really fundamental part of New Zealand's democracy and social services in a way that is inequitable for Māori.

"They've knowingly decided that, yeah, this is going to be inequitable."

The risks were exaggerated for Māori if it went wrong, with data worth $500m to their services and businesses in play, he said.

"I means strike three and you're out," Sporle said.

"This would be the third bad census for Māori and Pacific population.

"How much goodwill do you have to burn, especially when you've done a big consultation process and you've still gone ahead and done something, deliberately, you know is highly likely to be inequitable."

James Shaw said not only had the government put new governance and management in place at Stats NZ, and begun new Māori engagement initiatives, but that a lot of work was going on into non-census data that would improve what was known about the likes of iwi affiliation.

The $210m spend is low per capita compared to US and Canada spending on censuses, but similar to Australia's, said Stats NZ.

Around the world, census costs keep rising, flying in the face of an effort the government embarked on in this country almost a decade ago to cut census costs by 5 percent by now, by doing more online.

The 2018 census was the first 'digital-first' collection and aimed to save money and turn around a declining response rate. It achieved neither.

However, Stats NZ is carrying on with a census transformation project that it is due to report back on later this year.

Administrative data such as from Births, Deaths, and Marriages, and immigration data, was becoming more useful for supplementing the door knocking information gathered at the actual census, Stats NZ and the government said.

The 2018 census was complicated by the November 2016 Kaikōura earthquake.

Stats NZ has warned it remained unclear what impact Covid-19 might have on 2023, but it has opted not to try to delay the census until 2026.