Rescuers hope a sperm whale stranded near Timaru will refloat itself on the high tide tonight. 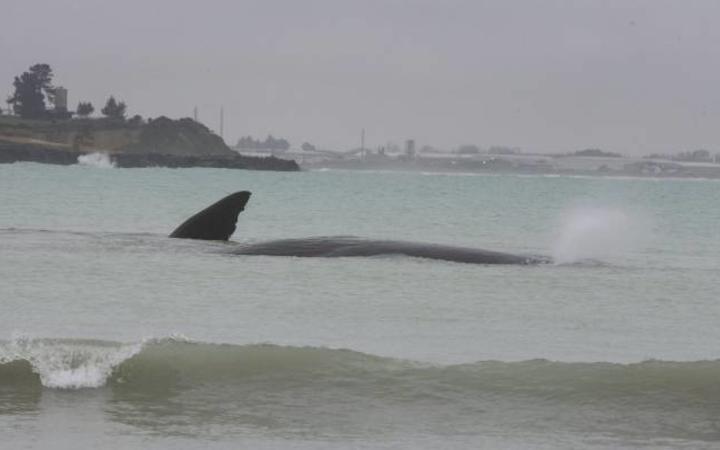 The whale stranded at Caroline Bay this morning. Rescue efforts so far by whale rescue group Project Jonah and The Department of Conservation have failed due to low tide and nightfall.

The department says the whale has a giant sling around its body which is attached to a fishing boat - the boat is holding tension on the sling, which will come free if the whale swims away.

The sperm whale is still stuck, but is in a much better position than earlier today, and rescuers hope it will refloat itself at the high tide, a spokesperson said. High tide for Timaru will peak about 9.30 tonight.

Project Jonah general manager Daren Grover said the whale is about 12 metres long and could weigh anywhere between 10 and 20 tonnes.

Rescuers first tried to use the sling to pulled the whale out to sea towed behind the fishing boat, but by late afternoon had brought in a digger to try to create a channel in the sand to help with refloating it.

When rescue efforts began the whale was grounded on the beach "but has about a metre of water around it," Grover said.

"Sperm whales usually live in deep areas of the ocean, so its very rare to see one so close to shore."

The rescue team has been balancing urgency with the need to be careful to minimise distress and injury to the sperm whale, he said.

"The idea [was] to gently edge and use the whales natural bouyancy as well".

Our staff are attending to a whale in trouble off Caroline Bay in Timaru. We are working with @ProjectJonah and the port company to plan next steps.

We’re asking people to stay clear of the area to allow our staff to respond. pic.twitter.com/nnPne5iSZI

The Department of Conservation said earlier today that the whale does not have any obvious injuries. It's asking the public to stay away from the area.

Police will monitor the beach overnight.

On Friday, a Brydes whale stranded at Whakatete Bay north of Thames and died.