The Archbishop of Wellington has condemned a sign reading 'All lives matter' that was displayed outside a Catholic church over the weekend. 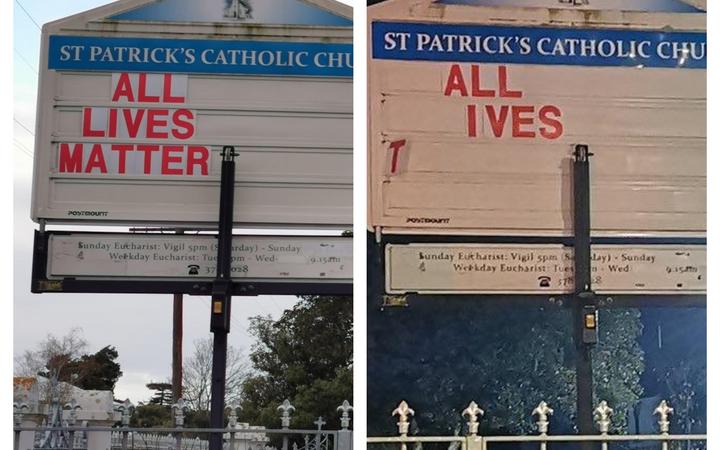 The sign at St Patricks Catholic Church in Masterton appeared to have been vandalised.

Cultural experts and anti-racism advocates labelled the sign racist, ill-timed and disrespectful, while the Race Relations Commissioner called it "provocative".

It comes after a weekend of rallies in Auckland, Wellington and Dunedin, where thousands of people turned up to show their solidarity with the Black Lives Matter protesters in the United States.

There has also been growing unrest in the US at the weekend, after a black man, Rayshard Brooks, was shot dead by police at a Wendy's drive-thru in Atlanta, after he attempted to run from them with one of the officer's tasers.

The Masterton church has not responded to RNZ's requests for comment, but the Archbishop of Wellington - Cardinal John Dew - condemned the "all lives matter" sign.

In a statement, Dew said the sign was put up without the knowledge of the parish priest while he was away on leave.

"As Archbishop for the diocese, I do not support the placement of that sign. It should not have been put there.

Masterton Mayor Lyn Patterson said the church did not seem to have been aware of the controversy surrounding the "all lives matter" slogan.

"I have spoken to the church about the message that was on the board outside the church and I'm really comfortable that the message wasn't intended to undermine the Black Lives Matter movement," she said.

"I just don't know whether they had realised the full on consequence of what 'all lives matter' was in regards to the Black Lives Matter movement."

Patterson said the church told her that it was linked to a traditional Catholic feast.

"I'm not a Catholic but I understand it's linked to the feast of the Corpus Christi which is a Catholic commemoration ovr the weekend. The intention really was highlighting the humanity of all people, so that's the explanation I have been given."

She said she could not tell a church what they could and could not do, but she expected the sign would be removed.

Patterson said she had not heard much from the community about the message.

"I haven't had any phone calls around it but I would understand and certainly appreciate why people might feel strongly about the signage.

"Lots of people have individual views on it, from my perspective, at the moment the 'all lives matter' messaging against the Black Lives Matter movement - it's just not appropriate timing."

Pacific lecturer and native Hawaiian Emalani Case said the church might not have received the same level of backlash six months ago.

"It's just ill-timed, it's offensive, it's disrespectful. We can't actually say 'all lives matter' until black lives matter, because black lives unfortunately often get left out of the 'all'." 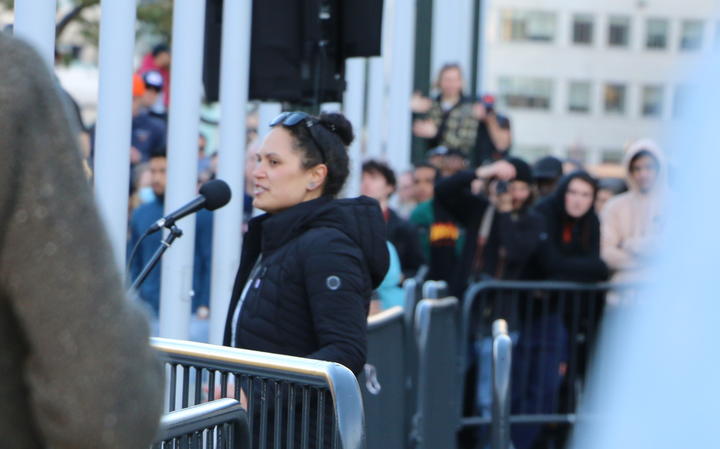 Case spoke at the Black Lives Matter march in Wellington yesterday about keeping momentum for racial equality going even if the social media storm died down.

"When I looked yesterday and saw thousands of people, it just filled me with hope that people are hopefully not just kind of riding the tails of this movement but also really wanting to do the work, so it requires calling people out."

Race Relations Commissioner Meng Foon said it would be "provocotive" to post the phrase on a public noticeboard.

"The statement is politically loaded and has been used to justify ignoring racial disparities, such as the over-representation of African American communities in police shootings. The phrase is therefore associated with racial division and intolerance," Foon said.

"People have the right to freedom of expression. However, it is equally important for people to be thoughtful about how they express themselves, including how their expression impacts others."

Emilie Rākete, of Ngāpuhi and Te Rarawa iwi, is an advocate for the Black Lives Matter marches, and said she understood why the sign was vandalised.

"When people see this kind of insistence that 'no, all lives matter', they're angered by it, not because they don't agree that all lives matter, they're angry because it's an attempt to whitewash a very real racist terror that many, many people in this country have to live under the constant threat of."

Rākete, who is also the spokesperson for People Against Prisons Aotearoa, said the idea that all lives matter was aspirational. "That means it's a value that doesn't exist yet in the world we live in". 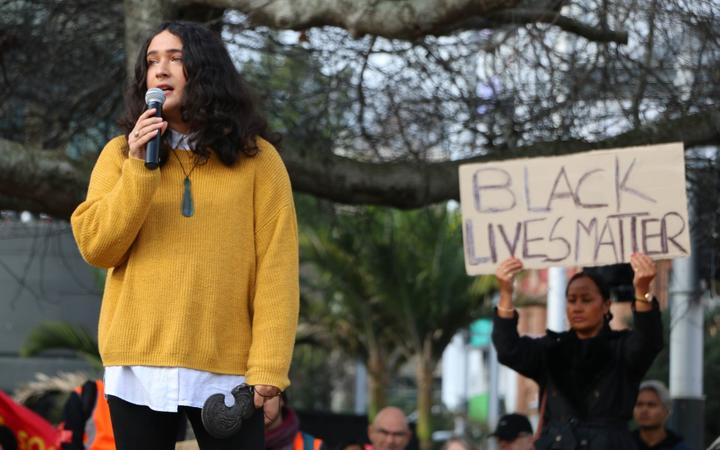 Emilie Rākete from People Against Prisons Aotearoa and the Arms Down movement speaks at the Black Lives Matter protest at Aotea Square in Auckland, on 14 June, 2020. Photo: RNZ / Mabel Muller

"When people say black lives matter and Māori people's lives matter we're not saying that because we don't like white people and we want to put all Pākehā in the ocean, we say it because our lives are treated materially by the state, like they don't matter."

The Black Lives Matter movement began in 2013 after African-American teen Trayvon Martin was fatally shot by a man who was later acquitted.

The movement has been fuelled recently across the world after the death of African-American George Floyd at the hands of police.