Atlanta's Police Chief has resigned after the fatal shooting of an African-American who had fallen asleep in his car at a drive-through restaurant. 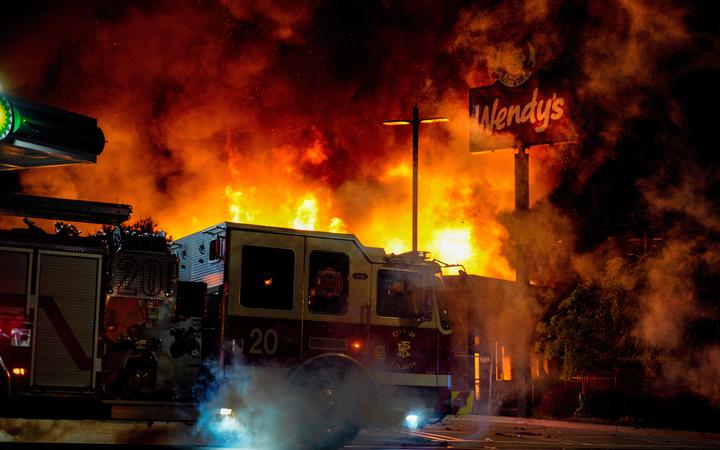 Demonstrators set on fire a restaurant during the protest after an Atlanta police officer shot and killed Rayshard Brooks, 27, at a Wendy's fast food restaurant. Photo: AFP

Rayshard Brooks, 27, was shot by a police officer during a struggle on Friday evening, authorities say.

Protesters in Atlanta took to the streets this weekend calling for action following Brooks' death.

On Saturday evening, demonstrators closed down a major highway, Interstate-75, in Atlanta. The Wendy's restaurant outside which Brooks died was also set on fire.

Breaking: The Wendy’s that rioters set on fire during protests in Atlanta, Georgia, in now engulfed in flames. Tensions between protesters and police are continuing to rise at this hour. pic.twitter.com/sapYGncN9v

Over the past three weeks, people across the US have already been protesting over the death of George Floyd, an unarmed black man in police custody.

Erika Shields had served as police chief since December 2016 and had worked in the Atlanta police department for more than 20 years. She will continue with the department in another role, Mayor Bottoms said.

"Because of her desire that Atlanta be a model of what meaningful reform should look like across this country Chief Shields has offered to immediately step aside as Police Chief so that the city may move forward with urgency and rebuilding the trust so desperately needed throughout our communities," Bottoms said in a statement.

Bottoms has also called for the sacking of the officer involved in Brooks' death. 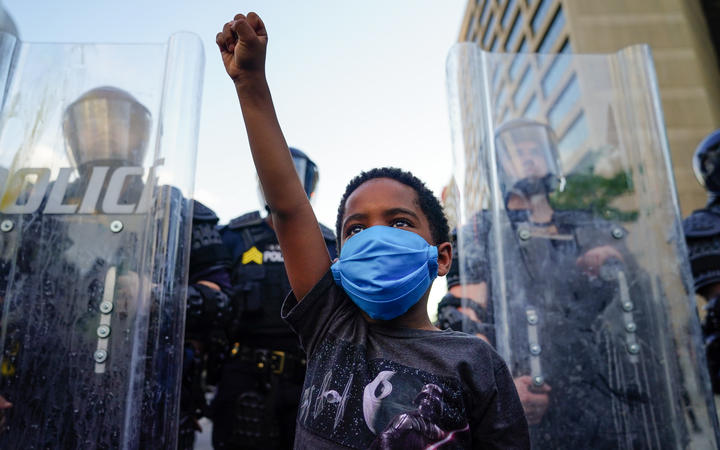 A young boy raises his fist for a photo by a family friend during a demonstration on May 31, 2020 in Atlanta, Georgia. Photo: Elijah Nouvelage / Getty Images / AFP

What happened on the night of the shooting?

The Georgia Bureau of Investigations (GBI) is probing the death of Brooks and is looking at video from a security camera inside the Wendy's restaurant and also eyewitness footage.

It says police had been called to the restaurant because Brooks had fallen asleep in his car, which was blocking the drive-through lane.

According to police, Brooks resisted arrest after he failed a breathalyzer test.

A report from the GBI said footage captured from inside the Wendy's restaurant shows officers chasing Brooks before he turns and points a Taser at an officer.

"The officer then fired his weapon, striking Brooks," the report said.

In the eyewitness video, Brooks can be seen on the ground outside the Wendy's restaurant, struggling with two police officers.

He grabs an officer's Taser and breaks free from the officers, running away. The other officer then manages to use a Taser on Brooks and both officers then run out of the frame of the video.

Gun shots can then be heard and Brooks is seen on the ground.

He was taken to hospital but later died. One of the officers was treated for an injury from the incident.

The Fulton County District Attorney's Office is conducting a separate investigation into the incident, it said in a statement. 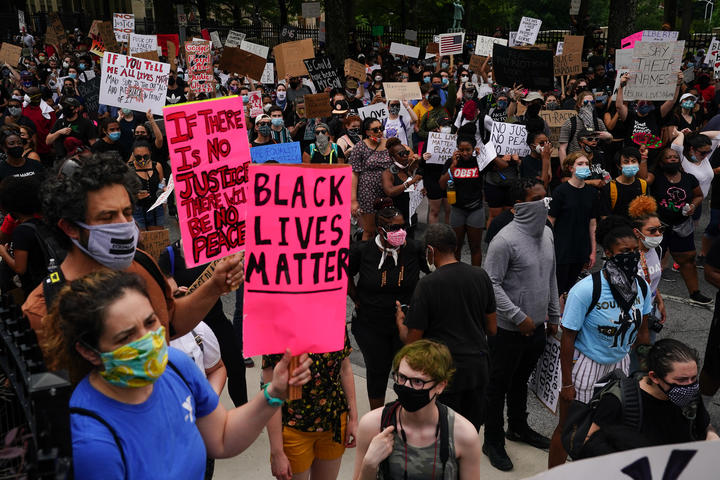 Lawyers representing Brooks' family said the police officer had no right to use deadly force, saying the Taser which Brooks had grabbed was a non-lethal weapon.

"You can't shoot somebody unless they are pointing a gun at you," attorney Chris Stewart said.

Brooks was supposed to take his eight-year-old daughter skating on Saturday to celebrate her birthday, lawyers for his family said.

This is the 48th officer-involved shooting the Georgia Bureau of Investigation has investigated this year, according to ABC News. Of those cases, 15 of those were fatal.

A number of protesters gathered outside the Wendy's on Friday, according to the New York Times.

Protests then began again in the centre of Atlanta on Saturday. Images from the protest show demonstrators holding signs with Brooks' name and Black Lives Matter signs.

People in Atlanta had already been protesting following the death of George Floyd. He died on 25 May after a Minneapolis police officer kneeled on his neck for over eight minutes. The officer has been sacked and charged with second-degree murder.