The Kaikōura Highway is on track to be completed by the end of the year, the rebuild construction alliance has said. 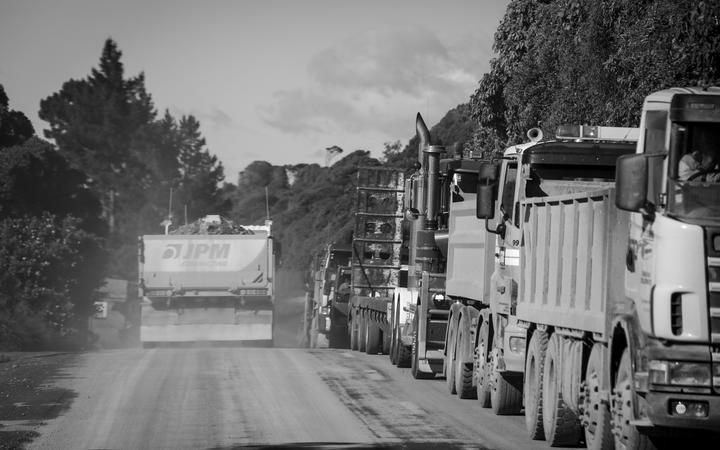 Hundreds of trucks and heavy machinery line the road along the coast in 2017. SH1 north of Kaikōura reopened that year although repair work has continued since then. Photo: RNZ / Rebekah Parsons-King

The road was badly damaged in the magnitude 7.8 earthquake of November 2016, and there are 12 areas between Clarence (north of Kaikōura) and Oaro (south of Kaikōura) that are still down to one-lane.

The works were suspended for a month during the lockdown, but resumed under alert level 3.

Project manager Will Doherty said despite the delay, they were still on track to meet their original project deadline.

"We're pretty much back up to where we were pre-Covid, in terms of we've got about 450 staff on site at the moment.

"We're obviously just looking at what the impact is to the overall programme and projects within that, but the indications are we're still on track for completion of physical works by the end of this year."

He said that safety controllers were in place to enforce Covid-19 safety measures, which included temperature checks for anyone coming in and out of the worksite, or the temporary village, and social distancing.

There were still over 100 employees staying at the temporary workers' village which has 300 rooms, a large kitchen and recreation area.

The village was put up for tender in early 2019, but additional work was added to the Kaikōura rebuild so it will stay in place until the end of the year, Doherty said.

Kaikōura mayor Craig Mackle, whose business Harmac Concrete supplied concrete for the rebuild, was pleased with how the highway rebuild had progressed.

"I never really appreciated the scale of it, even though we were watching it from its infancy to what it is now, until I went past it in a chopper at a 45-degree angle and it just blew me away.

"It has been a massive, massive feat to get where they are today."