Since the November 2016 Kaikōura earthquake, less than a third of Hurunui district's red-stickered buildings have been fixed or bowled. 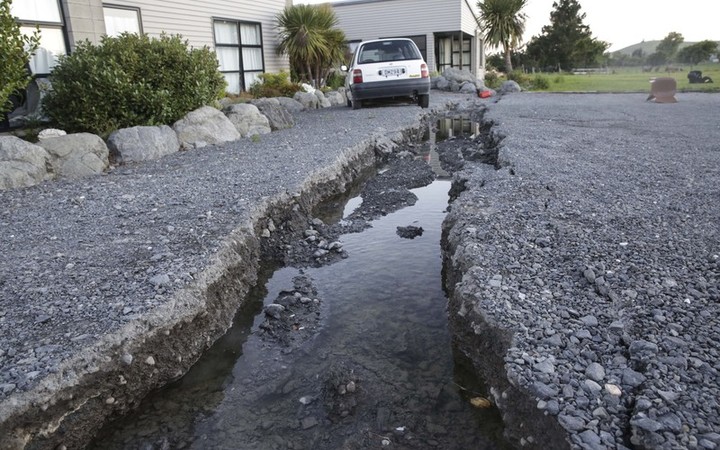 A metre-wide crack runs around 400m alongside a house in Kaikōura after the November 2016 earthquake. Photo: RNZ / Rebekah Parsons-King

That leaves more than 50 that are still too unsafe to enter - and some residents have asked the council to do more to get rid of them.

The historic Cob Cottage Museum in Waiau is one building about to ditch its red-sticker status, with reopening celebrations scheduled for Saturday, 14 March.

Amuri Historical Society secretary Sue Harris said it had taken a huge effort from the Waiau community and Hurunui District Council to reach the milestone.

"Cob Cottage was quite badly damaged... a lot of the plaster came off the walls, the chimney fell down, the outside of the Cob had a lot of cracks and the shake was so bad that the roof.. had come away from the walls," she said.

She said fixing it took a lot more than just sticking it together again.

"It's also working out money and insurance - and it is not a simple process. There's a lot of consents and et cetera to go through."

At least 23 other buildings in Hurunui have been repaired or bowled over after receiving red-stickers, or Section 124 notices, from the council. While 48 red-stickered houses and eight red-stickered commercial buildings remain.

Some locals have asked the council to give the owners of those building a nudge to get them bowled over or made safe.

In response last month, the council signed off on a plan to "increase the regulatory pressure".

Its chief executive, Hamish Dobbie, said staff would not be coming down on building owners with an iron fist but it was getting in touch with them, and asking what their plans were to get their buildings repaired or demolished.

He said one council employee had already been doing just that for three years - helping people with insurance, getting plans done, and finding tradespeople.

"Members of the community that I've spoken to have been happy that council's allowed people time to work through the issues with their buildings. But they've expressed the view that [it's] time now to speed the process up and council has agreed with that," he said.

The owner of the 110-year-old Waiau Lodge Hotel, Michelle Beri, is someone the council might talk to.

She bought the building after her own house was totalled in the Christchurch earthquake - only to have it red-stickered, spend two years waiting for an engineer's report, then discover her insurance didn't include natural disaster cover.

Beri said she was grateful for the council's support and community members who had donated money for the repairs, but making the old building structurally sound was proving immensely complex and costly.

From this week, she will be taking expressions of interest from potential buyers.

"Although it's the last thing I wanted to do," she said.

"She's a grand old lady. If you went in there you'd just think 'wow', she could easily be fixed up. But it's very devastating seeing her like that every day. It's very heartbreaking, has been for a long time. So I think one day I want to be happy again."

Beri said she welcomed the idea of more council input to solve people's red-sticker problems, despite other agencies usually being at fault for holding the process up.

"If you try to push the insurance companies, or those involved, you've still got to wait on them. They're the ones waving the wand, so I think the council do need to be a bit more involved with each [building owner].

"I know [the council has] got one or two people but I think there should maybe be a team giving people more ideas... 'cause they don't really know what to do, who to turn to."

However, Sue Harris said she was happy with the rate of progress to reduce the number of red-stickered buildings in the district.

She said towns like Waiau had limited people-power and the council had rightly prioritised more pressing problems, like damaged infrastructure and water pipes.