Corinna Alex is physically ill and heartbroken too. The Lyme disease which she's struggled on and off with since 2015 is back, while her fiance Colin Minney is stuck in the United Kingdom. 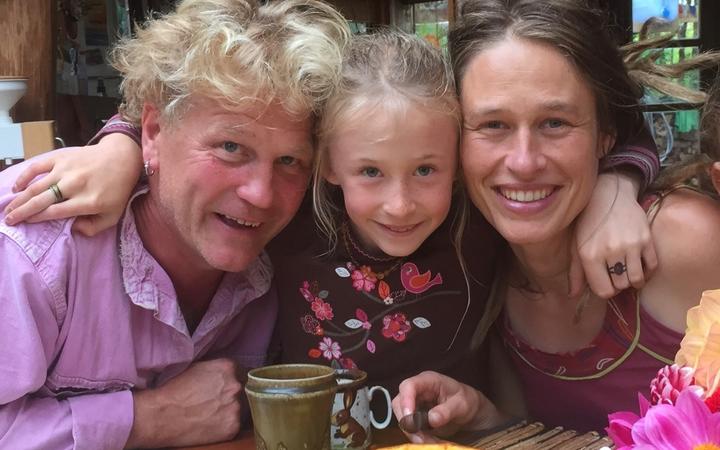 Colin was due to land in New Zealand a week after the border closed. He's since had two requests for permission to travel here turned down by Immigration New Zealand but there is now hope they can reunite after questions from RNZ prompted a review of their case.

At the moment, Colin is camped at a friend's place in Gloucestershire. It's fair to say the situation is complicated.

The couple have been together for six years after meeting in Golden Bay but in 2018 Colin returned to the UK because his mother was ill. It was meant to be a short trip, but he stayed on to spend time with his wider family and re-train.

The couple continued their relationship long-distance. Corinna went to visit Colin last June and they got engaged at a friend's wedding in Europe. Colin hatched plans to return to New Zealand early this year. He put his things in storage, sold his car and finished work.

He had previously lived and worked in New Zealand based on his relationship with Corinna but the time he spent in the UK has resulted in those rights lapsing. The couple are determined to be together.

"Colin and I are life partners... we still have our shared home, vehicle, bank account etc. here in New Zealand. When Colin left for the UK in 2018, he planned a short visit that unexpectedly extended," Corinna says.

Daily life is a struggle due to the Lyme disease and Corinna's daughter, Kiva, also has a rare illness.

"I am currently suffering from chronic pain and severe fatigue as a result of Lyme disease. I am struggling to cope with everyday life.

"Furthermore, I am solo parent to my daughter who has a congenital condition (Lymphangioma) that has required multiple surgeries and continues to require ongoing medical supervision."

Corinna, who has no extended family in New Zealand, says it was hard enough already being separated from Colin but it had become "extremely distressing" for them all.

Colin is desperate to get back and help.

"As her partner it feels critical to be there to support her and our family at this time. I have done all I can to support her from afar, and it just isn't enough to help the situation.

"We heard that it may be a long time before the border reopens and I could enter NZ without any special exception, possibly up to a year or more. I fear this could be detrimental to Corinna's current health challenge as well as our long-term family wellbeing."

Colin says the majority of their relationship together had been here and it was his long-term home.

"I have worked in a local business, got involved in a charitable trust, engaged in the local arts scene in theatre and formed many friendships."

Colin says Corinna urgently needs his support due to her health and the couple are in a committed relationship.

"We are ready to continue living together for the rest of our lives. She needs me to be with her now."

An Immigration NZ spokeswoman said it had reviewed Colin's two requests "against exceptional humanitarian criteria ... and in this case will be issuing him an invitation to apply" to be allowed to enter.

Why his second request under humanitarian grounds was rejected was not explained.

The spokesperson said there were a limited number of exceptions for non-NZ citizens or residents who could seek approval from it before travelling.

They include partners, dependent children (aged 24 years and under) and legal guardians of New Zealand citizens and residents; Australian citizens; and permanent residents who normally live in New Zealand.

Exceptions may also be granted where people had a critical purpose for travel including essential health workers; other essential workers who are specifically agreed to by the New Zealand government; Samoan and Tongan citizens on essential travel; New Zealand-based partners and dependent children (aged 19 years and under) of a work or student visa holder who is here and for critical humanitarian reasons.

The spokesperson said the border exception process was done in two steps.

"Individuals who think they may be eligible for an exception can make a request using a form on the INZ website. If an individual's circumstances are considered exceptional by INZ and justify travel to New Zealand for a critical purpose, or because they are the family of and travelling with a New Zealander, they will be invited to apply for a visitor visa, or to vary their existing visa to allow them to travel."

The bar for being granted an exception to the border restrictions was set high to help stop the spread of COVID-19 and protect public health, she said.

As of 19 May, INZ had received a total of 9446 expressions of interest from people seeking an exemption to the current border restrictions - 9210 had been decided, with 7331 refused and 1879 invitations to apply issued.