After weeks cooped up the nation breathed a sigh of relief this week - finally free to travel and see loved ones. 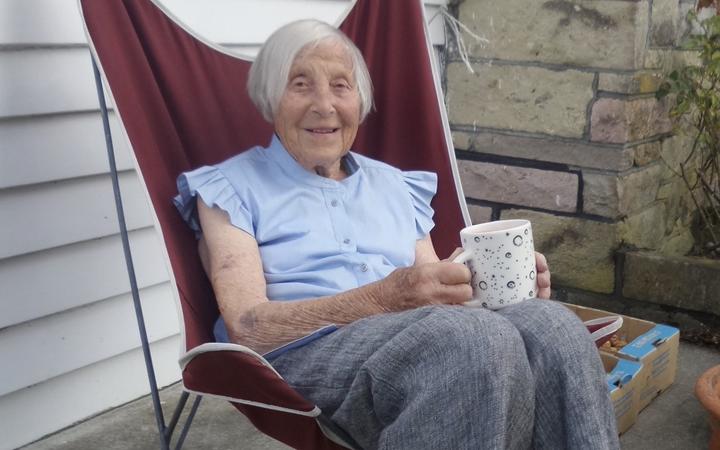 Patty Wigley is disappointed the cancellation of InterCity's buses - which she catches about every fortnight - will mean she cannot visit her great grandchild for the first time. Photo: Supplied

But the relief soured when the only nationwide bus network, InterCity - which provides cheap transport to 600 far-flung destinations - cancelled 3500 tickets saying it would not running services again until the end of the month.

It said it could not afford to operate under the physical distancing rules, with the Bus and Coach Association warning the long-distance and tourism bus industry faces oblivion because of the rules.

Patty Wigley, 93, from Palmerston North, takes an InterCity bus at least twice a month to visit friends and family across the country.

She said she was gutted her ticket to meet her great grandchild for the first time was cancelled.

"It is very disappointing, I find I'm very frustrated that I can't [visit people]. I've got great-grandchildren in Auckland and lots of friends, I just hope it is all going to come right."

About 1.5 million people ride with the company every year, and the vast majority of them - 85 percent - are domestic travellers.

With the borders closed to international visitors the tourism industry is desperate for New Zealanders fill the gap and spend up large.

Wigley said that could not happen while InterCity's fleet was idle.

"They say we need to see New Zealand, of course we do, but how can you if you can't get on a bus or a train or something. Not everyone has got cars, anyway."

Right now if you do not own a car, or don't drive or have a licence, your transport options are limited. KiwiRail is only running one inter-regional service, with no timetable for when the others will reopen.

All the Interislander ferry sailings for the next two weeks are fully booked - bar two - though the company is still deciding whether to bring on an extra ferry to meet demand.

The Bluebridge ferry would have no tickets available until after next week, with just a smattering left after even then.

While there might be locally-run shuttle or bus options in the regions, none have the reach or regularity of the InterCity network.

Air New Zealand is also operating a vastly reduced schedule - about 20 percent of the pre-Covid levels - with prices often higher than could be found before the pandemic.

Tim Howard from Whangārei Child Poverty Action Network said expensive flights were out of reach for many in Northland.

"Tai Tokerau Northland is one of the ... poorest areas in the country and for people whose whānau connections are absolutely important - caring for whakapapa - public transport is absolutely essential.

"The impact on them is far more likely to be a sharper."

InterCity said those who chose to ride with it were often on lower incomes, older people and those with health concerns or disabilities.

Grey District mayor Tania Gibson said many residents relied on InterCity to get to and from Christchurch for things like medical appointments or travel between the region's widespread settlements.

She said losing it was a big blow.

"I think we don't really know what we have until we lose it ... it has been an important link for medical appointments, and tertiary students that are travelling away and [boarding school students].

"It has been an important option."

She along with the other West Coast mayors and local iwi wrote to the government asking it help InterCity out.

The Transport Ministry said it has been approached by InterCity about options for support, and discussions were ongoing.

InterCity said in a statement it had sought government support to enable services to begin operating again.

"The exact nature of this support remains under discussion, but the assistance sought is not extensive and would only apply to the period where bus capacity is restricted," the company said.

It said it had offered to refund or rebook all passengers with cancelled tickets at no extra cost, or offer credit for travel within the next year.

InterCity is taking bookings from Friday 29 May in the hope New Zealand would be in alert level one with no physical distancing rules.