Ferries are running, Air NZ will distance passengers, bus company InterCity has cancelled all trips until 29 May, and all long-distance tourist rail will remain shut down. 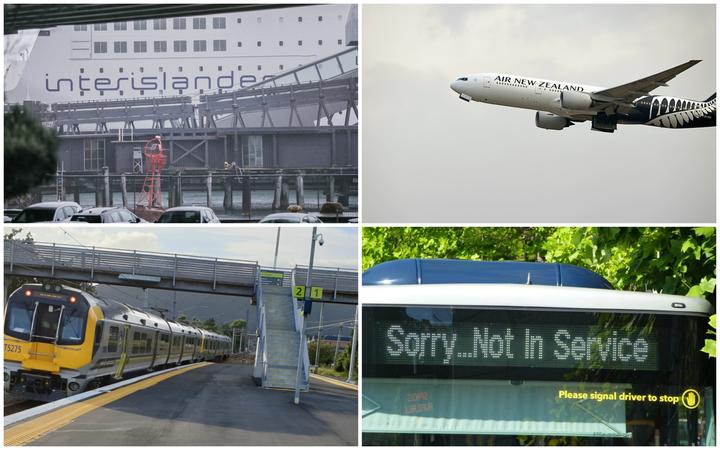 Air New Zealand said it would ensure an empty seat between passengers travelling alone, and keep travel companions together, when the country moves to alert level 2 overnight.

The airline planned to operate about 20 percent of its usual domestic capacity, with flights to the majority of its domestic airports.

Customer experience manager Nikki Goodman said food and drinks would not be served on flights during the first week of level 2, to minimise contact between customers and cabin crew.

She said customers would be encouraged to check in on the Air New Zealand app and there would be floor markers for queueing at airport counters.

The airline's lounges would reopen on the second week of alert level two but with no buffet, just packaged snacks.

The InterIslander ferries - owned by KiwiRail - will be returning to full pre-Covid sailing schedules from Friday to keep up with demand under lockdown level 2.

All three of InterIslander ferries will run, but they can only carry about a third of the usual number of passengers due to distancing rules.

KiwiRail group chief executive Greg Millar said there were still some tickets available this weekend and the company would decide next week if there was the demand to keep running the full schedule.

"So there's many reasons for people to travel and I would expect demand to be quite high."

Millar said the only inter-regional train service operating would be the Capital Connection between Palmerston North and Wellington.

He said there was no timetable yet for for when the other scenic routes would reopen while distancing rules remained and borders were shut to international tourists.

Closed services include the TranzAlpine between Christchurch and Greymouth, the Northern Explorer between Auckland and Wellington, and the Coastal Pacific between Picton and Christchurch.

Bus company InterCity said it was cancelling all trips across the country until the end of the month at least.

InterCity, which was privatised in 1991, said in a release the alert level 2 distancing rules would require it to run at less than 50 percent capacity, and it could not afford to operate under those restrictions.

It cancelled bookings for about 3500 people, saying they could rebook at a later time at no extra cost.

It said it planned to have bookings open from 29 May, hoping that by then the country would be in alert level 1 and physical distancing would no longer be required.

Intercity said it was in talks with the government and Ministry of Transport about any way to begin running services earlier.