There have been 20 new cases of Covid-19 in New Zealand in the past 24 hours, with no further deaths reported.

The 20 new cases are made up of six confirmed cases and 14 probable cases, bringing the total number of cases to 1386.

Director-General of Health Dr Ashley Bloomfield said there are now 16 significant clusters related to the coronavirus. The latest cluster is connected to an aged care facility in Auckland.

He said 13 people are in hospital, with three in ICU, two of which are in a critical condition in North Shore and Dunedin Hospitals.

"We now have 728 reported cases of people who have recovered from Covid-19 infection, that's an increase of 100 from yesterday."

Dr Bloomfield said he was aware of a death in Invercargill that has been reported to be connected to Covid-19, but he could not confirm if it was. The Ministry of Health was looking into it.

"We are seeking further information at the moment and until I have full information we are not in the position to confirm the cause of death of that man.

Dr Bloomfield said if officials were confident the death was from Covid-19, then it will be the first death in the community rather than in hospital.

Dr Bloomfield said 115 Covid-19 cases in New Zealand are health care workers, but less than five people were confirmed to have been infected by a patient they were caring for. 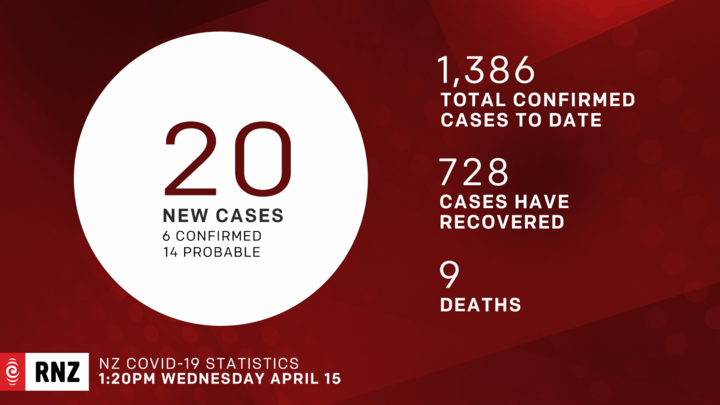 He said 2100 tests were processed yesterday, and there were currently 649 active cases.

He said the fact there were now much more recovered cases than current cases reflected that the bulk of cases were in the February-March period, and it did not mean any Health Ministry efforts against the virus would be downgraded.

"We are still not out of the woods."

Prime Minister Jacinda Ardern also confirmed at today's conference that government ministers, including herself, and public service leaders were taking a 20 percent wage cut for the next six months.

Ardern said she knew the decision to take a pay cut would not affect the government books, but leadership had to come from the top.

The prime minister also said a media rescue package would be considered soon by ministers, and there was also longer-scale work that would come out further down the track.

She said the government was spending a lot of money advertising about Covid-19, but had to be where the people were - and that included social media.

"Whether we like it or not, that's where the public are, and we need to reach them."

She did not want to give any more details about media packages ahead of them being announced, but said they would not be a surprise to the sector.

In other developments today, the government announced a $3bn in tax breaks and other measures to help small businesses survive the economic shock from the coronavirus pandemic.

Students across the country are connecting via Zoom, Google hangouts and other online platforms today as more than 800,000 teachers and students started two weeks of remote learning.

A government-assisted charter flight to bring home New Zealanders stranded in Peru touched down in Auckland this morning and passengers went into quarantine.