The government-assisted charter flight to bring New Zealanders stranded in Peru home has touched down in Auckland. 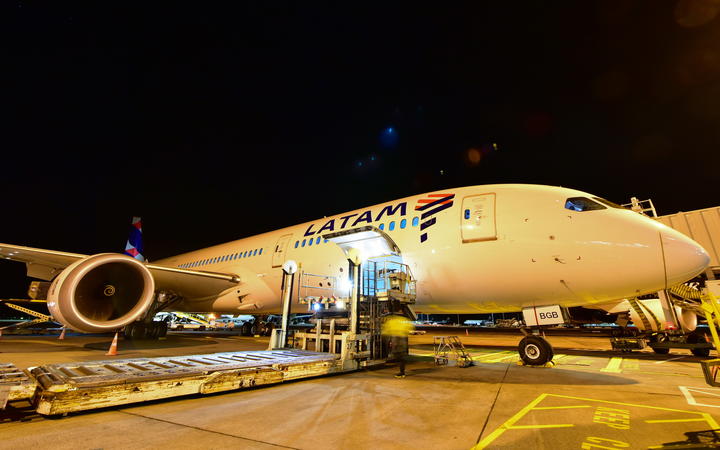 The flight picked up New Zealanders who were scattered through Chile and Brazil, too. Photo: Auckland Airport / Jordan Tan

The flight, a LATAM Dreamliner with 60 New Zealanders and three Australians on board, landed at Auckland Airport at 5am.

With no commercial services operating between New Zealand and South America, this was one of their last chances to get home, Auckland Airport said.

Tahlia Loughlin, who was on the flight, said: "I was in Cajamarca, northern Peru which is about 16 hours by bus, but the trip itself from when I was picked up at 8pm was 19 hours in total."

Others were in different situations.

Once they landed in Auckland, there were extra checks at the border.

"We were taken off the plane in groups of 10, then you were sent through ... with health checks, customs, then catching a bus to your hotel. The health checks were straightforward, it was just asking questions like 'are you feeling any symptoms' and then a temperature check. Customs was straightforward and it was a quick process."

In the meantime, Loughlin was feeling grateful for the small things.

"I don't think I was ready to leave [Peru] yet, but it's good to be home and it's good to breathe air that had a lot of oxygen, because I was at high altitude [in Peru] so it was very limited oxygen and this is fantastic."

Most of the passengers boarded the flight in either Lima or Cusco.

But more than a dozen people who had been scattered throughout Chile and Brazil were able to join the flight when it transited through Santiago.

As per the strict new border rules, they will now go into managed isolation in Auckland.