A man with New Zealand's fourth confirmed case of the Covid-19 coronavirus went to a Tool concert in Auckland a week ago, the Ministry of Health says. 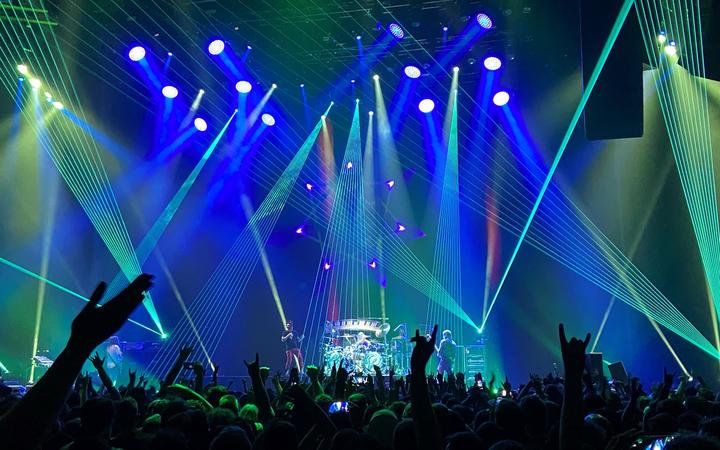 Tool in concert at Spark Arena in Auckland on 28 February. Photo: Chris Schulz

The man, a New Zealand citizen in his 30s, is the partner of the second case announced earlier this week, the ministry said.

The man has been in isolation at home since Wednesday.

The Auckland couple had recently arrived back in the country from northern Italy. Contact tracing is under way and close contacts are already in self-isolation.

In a press conference, Director-General of Health Dr Ashley Bloomfield said the man attended the Tool concert at Spark Arena in Auckland a week ago, on 28 February.

He said the man may have been infectious and was in the front left quadrant in the general admission standing area.

The virus is not believed to be transmissable by people who do not have symptoms. Dr Bloomfield said people who were in that area were casual contacts - and not close contacts - so he was just advising them to be aware of the symptoms and contact the healthline number if they appeared.

"There's no way we could know which people were in that area, so our advice to them is that they are casual contacts, they are at low risk and the appropriate action for them is to just be aware of the symptoms, call healthline if they are concerned or if they have any symptoms."

He said the risk was very low for all others who attended the concert.

People worried they have symptoms of the coronavirus have been advised not to visit a GP or hospital to avoid spreading it to health staff or other patients.

The couple's children have also been taken into isolation, but had not been displaying symptoms. Children are believed to be more resistant to the virus.

Dr Bloomfield today said the older family member - the person's father - was also being tested for the virus and he was confident he would prove to be the symptomatic case that carried the virus into the country.

The ministry also sought to reassure people who were visiting health centres for routine visits that they need not be concerned.

"If you have visited a centre and are considered to be at risk, you will be contacted by public health officers. They will determine if there is any risk to staff or other people who may have been at the centre at that time. Appropriate contact tracing and action will be taken as required."