A Taranaki bus company is being credited with helping to kick-start a nascent cruise ship market in New Plymouth. 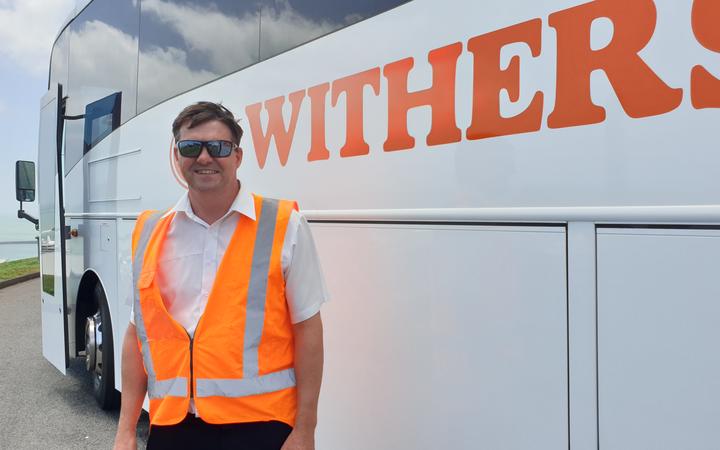 Blair Withers never thought the joke about cruise ships heading to Port Taranaki having missed the turnoff to Auckland was all that funny. Photo: RNZ / Robin Martin

On average only three cruise liners dock at Port Taranaki each summer but plans are now afoot to grow that number ten-fold.

It's a running gag in New Plymouth when a cruise ship approaches Port Taranaki that it must have missed the turn off to Auckland or Tauranga.

But it's not a joke that Blair Withers, the owner of Withers Coachlines, has ever found too amusing.

Already active in the growing cruise sector elsewhere in the North Island, Withers couldn't understand why New Plymouth was missing out so took matters into his own hands.

"You know 10 years ago Taranaki wasn't really on the radar for cruise ships turning up. Nobody really knew about us so I went along to some of the cruise conferences and said 'hold on a minute here we are, come along'. Then obviously trying to chip away, chip away for the last decade to try and get a few of them here and we've had a couple successes."

Withers said with Napier getting up to 100 cruise ships a year through its port, there was no reason why Taranaki should not attract more cruises.

"When you take people to Tawhiti Museum down in Hawera with Nigel Ogle. That's world-class. People come away from that thinking it's absolutely fantastic. We've got our beautiful mountain that we can show them and all these other things.

"You look at the West End Precinct with the Len Lye Centre and the Govett Brewster Art Gallery and Puke Ariki Museum all that kind of area. We've got some pretty wonderful product to show them."

Withers said the cruise sector should be a focus for Port Taranaki alongside its hydrocarbon and log export businesses.

And it's a message that seems to be getting through. 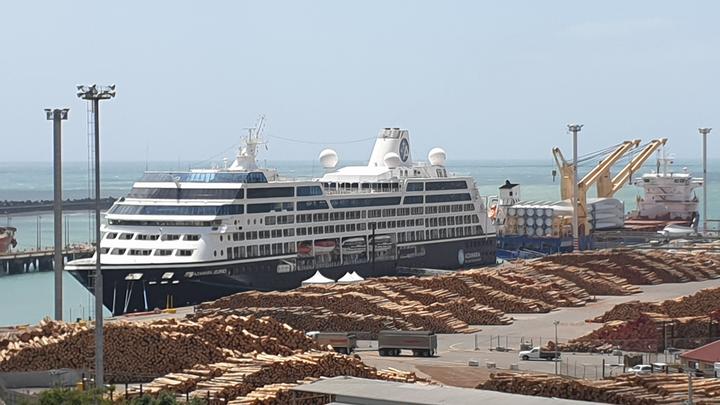 "I have a number in my mind where I'd like to see 30 cruise vessels in here a year so that's 10 times more than we are getting at the moment and we can accommodate that. And I think we can accommodate without causing too much angst with some of our export customers who want to come into the port, load up and leave as quickly as possible."

The Azamara Journey, which recently made its maiden visit to Port Taranaki, wrapped up its 2020 cruise ship season.

The 180m ship was carrying 690 passengers, but Dingle said it would be dwarfed by cruise liners already booked in for next year.

"The Queen Elizabeth will have roughly 2500 passengers and the Island Princess will have about 2200 passengers, but then on top of that they probably have a 1000-plus crew.

"If you have four vessels with that sort of capacity coming into port you know that's four vessels bringing 8000 to 10,000 visitors to Taranaki over a short period of time."

Dingle said the number of passengers expected through Port Taranaki next year would easily be more than double that experienced this season.

"One of the difficulties I guess for anywhere on the western side of the North Island was 'is it on the way to somewhere?' In other words it should be a port call that is part of an overall journey."

O'Sullivan said this had been overcome by linking to Nelson and Wellington and at least one ship would head straight to New Plymouth from Melbourne in 2021 and be the first port call on a tour of the country.

He said Taranaki was a fantastic stop.

"The Len Lye Museum for example, when I first saw that it bowled me over. It was absolutely superb. But it's a lovely place. I think the Coastal Walkway all the way from the port into the city is excellent as well, a great innovation, and it's really useful to be able to get off a ship and wander at your leisure all the way into the heart of the city."

More than 40 cruise ships navigate around New Zealand each season making about 1070 port visits as they go.

The sector is worth more than half-a-billion dollars annually, a figure the Cruise Association estimated was growing by 10 percent a year.

And local operators are hoping more of that will be spent in Taranaki in future.