Suspended in an observation dome, high above the deck of a large cruise ship, passenger Russell Wells was puzzled by what he saw. 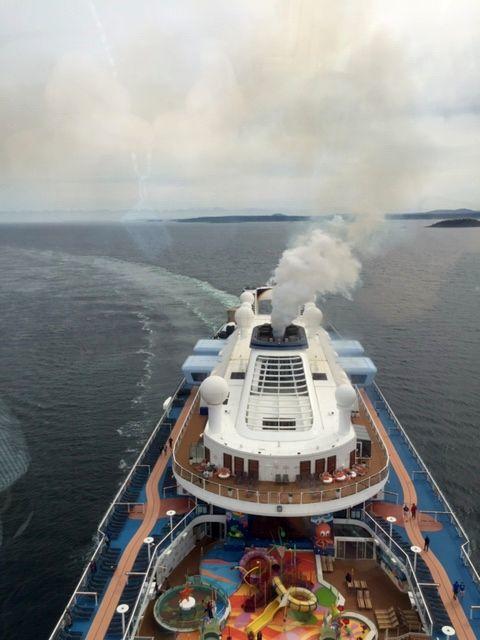 The Ovation of the Seas' smoky funnels did not go unnoticed when it was in New Zealand. Photo: Supplied / Russell Wells

The Ovation of the Seas, steaming through pristine Canadian waters, was belching out thick blue smoke from one of its funnels.

"It was a quite sustained, blue exhaust. It seemed to be out of only one of the funnels but it lasted a long time so you would have expected it to clear," he said.

"If it was an engine doing that it would have been pretty obvious and I would have thought they would have shut it down."

The Wellington-based mechanical tradesman who once worked on diesel engines in the rail industry knows a thing or two about emissions.

Mr Wells wondered if the ship might have been burning a stack of rubbish.

"Well, that was my question because I don't see why you'd run a ... what appeared to be defective diesel engine for that length of time."

"Due to the efforts of highly trained waste management professionals on board, some cruise ships repurpose 100 percent of the waste generated on board, by reducing, reusing, donating, recycling and converting waste into energy," the association said in a statement.

A Norwegian green technology firm Scanship said modern cruise ships generated as much waste as a small town, and had developed efficient ways of disposing of rubbish.

It said most ships used an onboard incinerator to burn waste and there were strict laws around the disposal of ash.

The Ovation of the Seas belonged to the third-largest class of cruise ships on the planet. It carried almost 5000 passengers and was one of Royal Caribbean Cruises' newest vessels.

And its smoky funnels did not go unnoticed when it was in New Zealand.

Southland harbourmaster Lyndon Cleaver said the Ovation did have a few issues last season, linked to it not running its exhaust cleaning system properly.

"We received a number of complaints last cruise ship season, in particular on cruise ship exhaust emissions in Milford Sound, and the inversion layer they were creating in there."

Despite several attempts to reach Royal Caribbean's public relations office in Sydney, to ask if the Ovation had an onboard incinerator, RNZ has so far had no response.

Mr Cleaver said he had been on board a number of cruise ships to carry out environmental checks, and they had "very good" recycling systems, governed by deeds of agreement, particularly when operating in highly sensitive environments.

Cruise ship passenger Russell Wells said that onboard waste disposal methods were at least an improvement on those used by shipping when he emigrated from England as a youngster in the late 1960s.

"In those days, we used to see all these cardboard boxed full of egg containers and stuff like that just thrown off the stern of the ship - just dumped at sea, and that, I presume was the norm.

"Eventually I assume it all sank."

The waste that could not be incinerated was bundled up and stored until it could be offloaded at the next port of call, where it was treated and sent to landfill.

Ports of Auckland said in a statement it had to be collected by a contractor approved by the Ministry for Primary Industries.

"The rubbish is all treated as quarantine waste and goes to an approved facility where it goes through an autoclave (heat treatment) and then into landfill.

"Where deemed clean, cruise ships are able to recycle paper and glass but this has to have been pre-inspected by MPI," a port company spokesman said.

Mr Cleaver said they would continue to keep a close watch on the cruise industry.

"We have to keep them honest. It's our reputation that's at stake and we have a World Heritage Site such as Fiordland National Park, and we want to look after it."