A study of Picton's air quality could prompt changes for shipping, and for homeowners in the Marlborough harbour town. 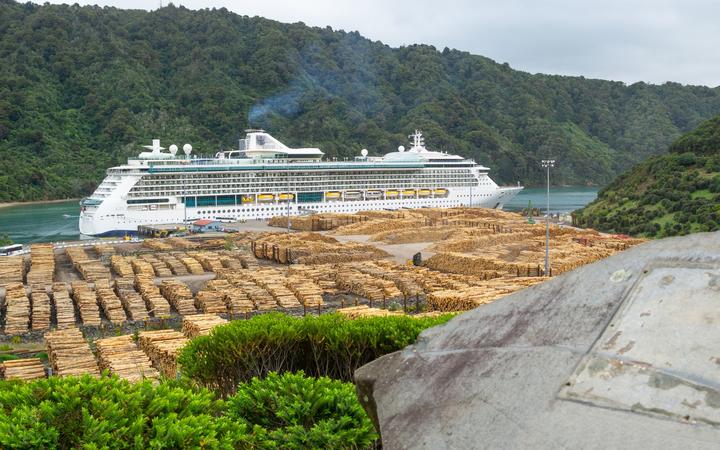 Logs for export and a cruise ship at Picton wharf. Photo: 123RF

Marlborough District Council and NIWA are about to start a year-long study of air quality in the Marlborough Sounds township, which is expected to see an increase in shipping and a rise in tourism.

Council scientist Sarah Brand said the population was also expected to grow, all of which had prompted the need to know more about Picton's air quality and sources of air pollutants.

The chair of the council's environment committee said more cruise ships were expected, and at the moment New Zealand was not part of an international treaty to reduce ship emissions.

The council was urging New Zealand to sign the International Convention for the Prevention of Pollution from Ships (or MARPOL), through its submission to a Ministry of Transport document.

The ministry announced last November it was seeking public and sector input into a decision on whether New Zealand should sign Annex VI of the treaty.

Councillor David Oddie said New Zealand and Mexico were the only two countries that were not signatories to the treaty.

He said it meant ships did not have to switch to lighter fuels which were finer and less polluting when coming into New Zealand ports, and that had considerable consequences for enclosed ports like Picton.

"There are more cruise ships coming in here, and in most ports the shipping doesn't arrive slap-bang in the centre of town but on the coast where it's more exposed," Mr Oddie said.

He said there had also been a growth in tourism and the addition of a coal-powered steam train in Picton.

"It has a polluting effect when it sits in the station waiting to pick up cruise ship passengers," Mr Oddie said.

He said an additional problem was wood and coal burned in home heating systems.

It was possible that Picton homes might have to switch to compliant, cleaner burning wood-burners, Mr Oddie said.

"There's a new district plan coming out at council which will address some of that, but it's an education thing as much as anything."

Mr Oddie said there had been several air quality studies done in the past in Picton, which showed it met the PM10 pollutant standards, but it was evident on some days that pollution levels were unacceptable.

"You only have to drive up over the rise in the morning and look down to see the layer of smoky air sitting there in the basin."

He said it was an obvious problem but the new study would address the level of pollution scientifically.

"Once we've got all the facts, we'll decide what we're going to do about it, but it may require over a specific timeframe a change to some fireplaces."

The air quality study starts this week with the installation of monitoring equipment at locations around the town. Transmitters would record air quality from next month until the end of winter next year.

The council said its results would help the council, iwi, industry, and the community to work together towards improving Picton's air quality.