A cyclone with New Zealand in its warpath will see sizeable waves pummel the East Coast of the North Island this week. 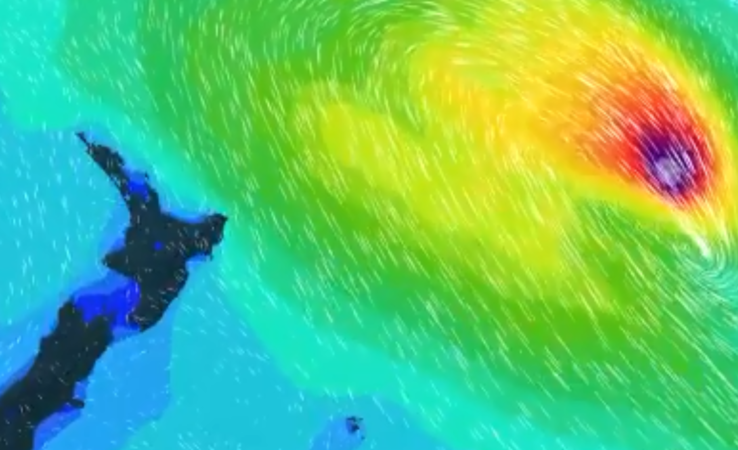 Cyclone Tino has been downgraded and much of the front will miss New Zealand. Photo: Twitter / NIWA

Cyclone Tino will cause more than a ripple at beaches on the East Cape, Gisborne and Hawke's Bay as well as the Bay of Plenty, eastern Coromandel and parts of Northland and Wairarapa.

WeatherWatch's Richard Green told Morning Report that while the cyclone had been downgraded, swells from the front would hit the northern and eastern coastline of the North Island.

"What we're talking about here particularly is the areas that are often relatively calm, could see swells of between one and three metres, and although that doesn't sound a great deal in terms of height, when conditions are fairly stable or calm this could potentially be quite significant."

Green said the strength of the cyclone, which swept over the Pacific nations last week, surprised forecasters.

"Before the weekend we thought category one, may nudge category two, but the fact that it got well and truly into the category three size and talking winds of 180km/h was a bit of surprise.

"But more often than not these days we see these cyclones or typhoons growing very quickly."

He said forecasters were keeping a close eye on sub-tropics for any developments.

Tropical Cyclone TINO has now been re-classified as an extra-tropical low, and is moving to the southeast away from New Zealand. This system poses NO threat to NZ. https://t.co/RavSjIGaMu ^Tahlia pic.twitter.com/MGg5pU6cbL

Meanwhile, skies in Wellington have been blanketed in fog and low cloud, causing flight disruptions.

MetService says fine weather can be expected for much of the country, while an active front is expected to approach Fiordland on Friday.

WeatherWatch's Richard Green said warm temperatures would probably continue for the remainder of the month, but people should be wary with fire restrictions and drought-like conditions across the country.