Security officers have begun to dismantle a 'history of oil museum' erected by protesters in the entrance of OMV's New Plymouth headquarters. 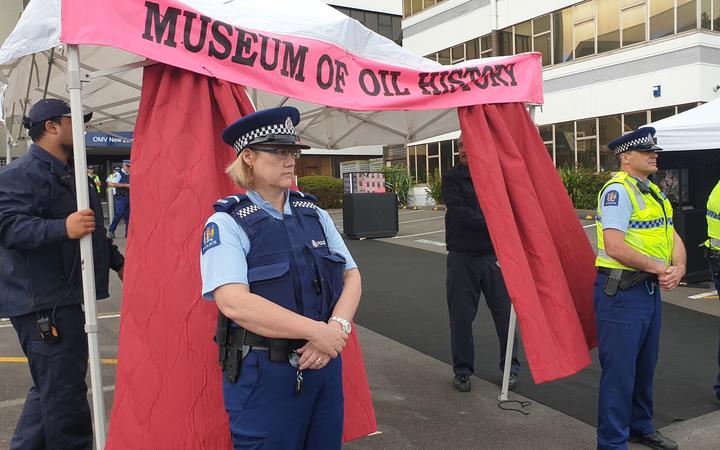 After apparently ending their three day barricade of the offices on Devon Street yesterday, the environmentalists were back at 7am today.

The protesters have been active for the past two weeks as OMV is about to begin drilling off the Taranaki coast before moving to the Great South Basin off Otago.

She said oil companies needed to be consigned to history and the museum was a symbolic start.

The construction included a petrol pump, a derelict car, and two marquees housing other artefacts from the oil industry's past.

She said there one thing was missing from the exhibits, "which is an empty picture frame which should include OMV's drilling permits. They haven't surrendered them yet but our message to OMV is those permits should be in a museum".

She said the group would keep up their pressure on OMV.

About 10 police officers took up positions as security guards began pulling the 'museum' down, and about 50 demonstrators sang waiata.

Managing director of OMV New Zealand Gabriel Selischi has previously said the company respected the right to protest but that it should be done peacefully and lawfully and in a way that did not put protesters or others at risk. 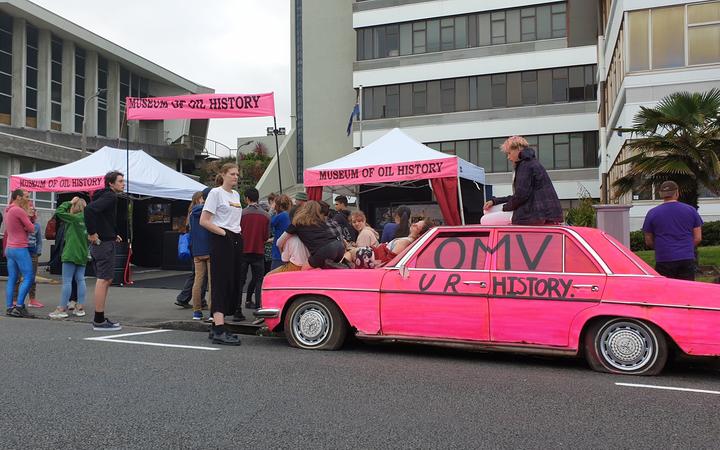 Protesters set up the 'History of oil museum' at the entrance to OMV's offices this morning. Photo: RNZ / Robin Martin

Greenpeace has said OMV was one of just 100 companies responsible for 70 percent of global carbon dioxide emissions.