Twenty protesters who stormed an oil company's support ship in Timaru yesterday, are still refusing to leave after spending the night on board. 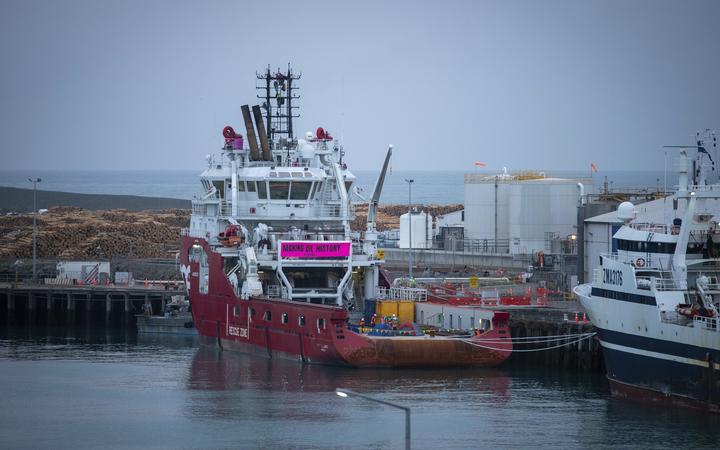 The occupied ship's owner OMV plans to drill for oil and gas off the Taranaki coast next month. Photo: Supplied / Greenpeace

Owner of Skandi Atlantic, Austrian corporate OMV, plans to drill for oil and gas off the Taranaki coast next month, followed by more drilling in the Great South Basin.

The activists allege OMV is one of 100 companies responsible for 71 percent of global emissions since 1988.

Speaking onboard the ship, environmental Justice Otepoti member Jack Brazil told Morning Report protesters were locked together and were in communication with the ship's owners and police.

"We've just been keeping things polite and we're not wanting to cause them any harm. This is about OMV the company," he said.

Mr Brazil said police negotiators had been in contact with them and so far, they had not been trespassed.

"They were saying we were doing a good job and that's recognising that this is a system's problem and sometimes good people do have to disobey bad laws."

He said they would remain on the ship for a undefined period to hold OMV to account for "war crimes" and to highlight the destruction multinational companies were doing to the planet and democracies, including corporate involvement in Latin American nations currently facing coups and social unrest.

Mr Smith, of Ngā Puhi and Ngāti Kahu, accused the corporate's chief executive Rainer Seele of crimes against humanity and the environment, including genocide, in the International Criminal Court.

The climate activist delivered the news outside the OMV headquarters in Vienna, Austria.

In 2010, the European Coalition on Oil in Sudan (ECOS) published the report Unpaid Debt calling on Sweden, Austria, and Malaysia to look into allegations that OMV and other companies were complicit in the commission of war crimes and crimes against humanity when operating in Sudan, during 1997-2003.

Mr Brazil said: "I'm here because I have an incredible privilege in New Zealand where we actually have some pretty good news that do protect us, unlike what's happening in Chile, Lebanon, Hong Kong, Iran, Ecuador, Colombia, Venezuela.

"We're just here to stand up to these extraction companies ... We're here to stand strong and speak for those voiceless and those who have died because of the industry."

Another protester, grandmother Rosemary Penwarden, said she was taking action for her grandchildren.

She said, in the midst of a climate emergency, she hoped Prime Minister Jacinda Ardern would step in and stop the oil drilling to protect the environment.

OMV says it respects the right to protest, but what has happened involves trespass.

The police say they are monitoring the situation.