A team could be inside the Pike River mine's entry tunnel by Christmas. 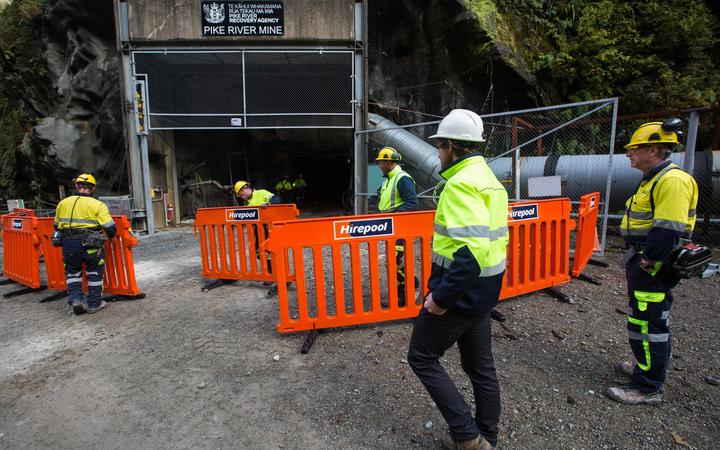 The agency mining team puts a barrier 5m in front of the mine portal. Photo: Pike River Recovery Agency / Supplied

It follows on from WorkSafe's approval of an exemption from the requirement that there always be an ability for workers to escape from a mine in an intake airway.

WorkSafe general manager Mike Hargreaves said worker health and safety outcomes were at least equivalent to the outcome of adhering to the regulation.

The requirement would have needed a 'exhausting ventilation' process, where fresh air is drawn into the mine up the roadway and later sucked out of the mine through a duct by a fan.

Instead, the Pike River Recovery Agency (PRRA) will use a process called 'forced ventilation', in which fresh air is forced by a fan to the working space through a duct and then the air flows back through the roadway to the entrance of the mine.

The move allows the 170m seal to be breached and for a small group to work their way 2.3km down the tunnel to a large rockfall, looking for bodies and evidence of what caused the mine to explode.

Pike River Recovery Agency chief operating officer Dinghy Pattinson said fresh air was being pumped beyond the seal to clear away the nitrogen inside.

"That'll take a number of days to do. It will take most of this week. Once we know we've got fresh air up there, we're going to monitor that and assess it for a week so we can prove that the changes we've made to the environment underground has stabilised and it is safe to proceed."

Mr Pattinson said at that point the 170m seal would be removed and a team would start moving down the tunnel.

Minister Responsible for Pike River Re-entry Andrew Little said the recovery efforts and forensic examination are "part of an overdue act of justice" for the 29 men who died in the mine, and their families.

Mr Little said the PRRA had come under "intense scrutiny" from WorkSafe, he said, which was how it should be.

"We have said we want the best health and safety record, no more lives put at risk ... so it's pleasing to see the Agency has provided WorkSafe with very good information, that's enabled WorkSafe to make its decision, and now the operation continues."

The personnel going in were forensically "aware" and have had police training, with police on stand-by to assist where necessary, Mr Little said.

"But as they make progress they'll be examining the ground and the circumstances around it, keeping a record of everything they find."

The most challenging part would be once they went well into the drift, he said.

The objective was to get to the area called the Pit Bottom in Stone, said Mr Little, which held "the greatest prospects of getting new evidence and new information that can better inform us about what actually happened".

There was still a criminal investigation underway and he said any evidence gathered would be assessed as to whether any further action could be taken.

"In addition to everything else, clearly one of the things that the families have grappled with is the fact no-one, no individual who was a decision maker responsible for Pike River, has ever been held to account - and that's wrong."

Sonya Rockhouse, who lost her son in the mine, said she vindicated by today's announcement after being told three years ago by then prime minister John Key, that re-entering the mine would be unsafe and "lunacy".

She said alongside a hope the team might discover some of the bodies of the 29 men inside, there was a desire to see evidence gathered that might help to hold somebody accountable for the disaster.

WorkSafe said the exemption applied only to re-entry and recovery of the drift up to the phenolic plug at the end of the 2.3km drift, and must remain in place and effective throughout the recovery work.

If any changes occur that could impact on workers' health and safety, then PRRA's critical controls will be implemented, an action response plan will be triggered, and WorkSafe will be advised.

The exemption will take effect from tomorrow and does not change the requirement for the PRRA to ensure, a healthy and safe work environment, WorkSafe said.

"The drift": The name given to the 2.3km-long entry tunnel into the mine that mostly moves through solid rock up to the main workings of the mine.

"Mine workings": The web of tunnels beyond the drift where coal had just started to be extracted when the mine exploded. It is thought this is where the ignition occurred that caused the first explosion and that this is where most, if not all, of the men are. Unusually for an underground coal mine, the ventilation fan (one of the possible ignition sources) is also located inside the mine workings.

"Nitrogen": The gas that has been pumped in to the drift and the main workings in order to push out the highly explosive methane inside. This will be progressively forced out by the fresh air which is now being pumped in to the drift, allowing a team to re-enter it without the need for breathing apparatus.