The Pike River families are set to go 170 metres into the mine drift - further than ever before. 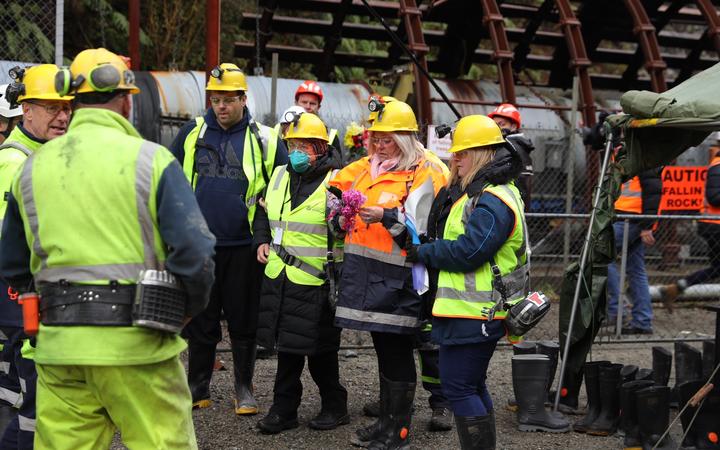 Families arrive at the mine. Photo: RNZ / Simon Rogers

Twenty-nine men died in an explosion at the mine in November 2010 and work is being carried out to re-enter the mine.

This morning about 30 family members will be taken down the drift, the start of the 2.3 kilometre tunnel, to where the mine is now sealed off.

They will go in small groups in vehicles specially designed for mine travel and will be accompanied by a guide.

It was likely they would spend a few minutes at the seal before returning.

Sonya Rockhouse, whose son Ben died at the mine, said she was not sure how she would feel until she was standing at the seal.

"Right now I'm nervous about it but also proud that Anna and I have been able to help get the families this far," she said.

Ms Rockhouse and Anna Osborne, whose husband Milton died, led the push to go into the mine to try to recover the remains of the men who died and to look for evidence of what went wrong.

That work is continuing but Ms Osborne said today was a significant step.

Ms Rockhouse told Morning Report families will have about 10 to 15 minutes when they reach the 170 metre seal.

"It's very exciting, momentous and a longtime coming, we've worked very hard to get to this point so it's a little bit exciting."

She said it might only seem like a small distance but every metre is another metre closer to getting closure.

"This has been a long, long journey but we have fought hard for truth and justice and it is almost here," she said.

She thanked New Zealanders for their support.

To the critics, she said; "Walk a mile in my shoes ... people can criticise all they like but until you are in that position, you don't know how you're going to react and if it was your loved one I'm sure that they would change their views very quickly."

Ms Osborne, who was battling lymphoma, was due to undergo cancer treatment the day after the mine visit.

"The thought of standing that close to Milt and of how far we've come will give me strength. I wouldn't miss it for the world."