Pike River families have laid flowers and taken small rocks as mementoes as they visit the seal to the mine for the first time. 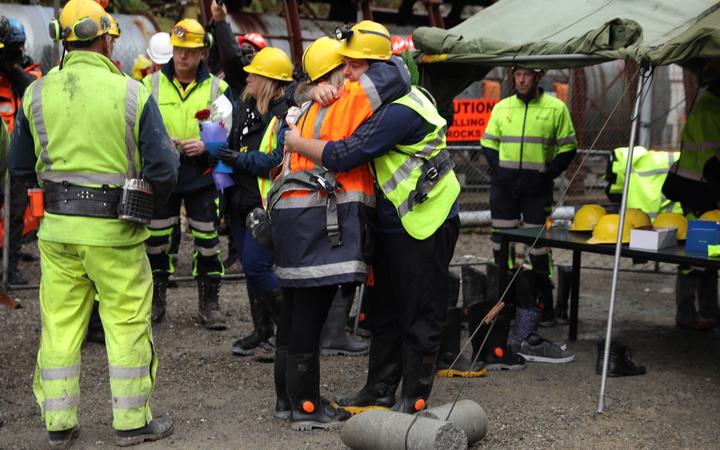 Twenty-nine men were killed at the mine in November 2010 and work is underway to reenter the 2.3km tunnel.

About 30 family members have gone in small groups 170m into the drift - the start of the long tunnel that leads to the mine itself.

Anna Osborne and Sonya Rockhouse - who have fought for years for the mine reentry - were in the first group to go in.

And survivor Daniel Rockhouse was with them - the first time he has been that deep into the tunnel since the day he left it, lucky to be alive.

The women said it was a very emotional moment for them and they thought about Ms Rockhouse's son Ben and Ms Osborne's husband Milton on the other side.

"We were able to put our hands on the seal and I was able to talk to Milton and I almost felt him there," Ms Osborne said.

"I just said to him that we hadn't forgotten to him. We are coming to you, we're getting closer and I hope he's proud of us because we won't give up," she said.

Ms Rockhouse said there were "lots of tears" at the seal.

She was thinking both of her son Ben who died and her sons Daniel and Matthew who also went into the tunnel today.

"For Daniel, it was a huge thing for him to go up there today," she said.

"He's a huge part of this as well ... it's very difficult for him, he has survivors guilt and probably always will."

Brian and Barbara Nieper whose son Kane died said they took the chance to say sorry to Kane for not being able to help him that day.

An emotional Mr Nieper said while it was good to go into the mine "that bloody wall" was still in the way.

He was looking forward to when the seal could be opened, he said.

The fate of the next step is for WorkSafe who has to approve the plan to go beyond the seal.