Stephen Colbert's series on his taxpayer-funded visit to New Zealand has launched on The Late Show. 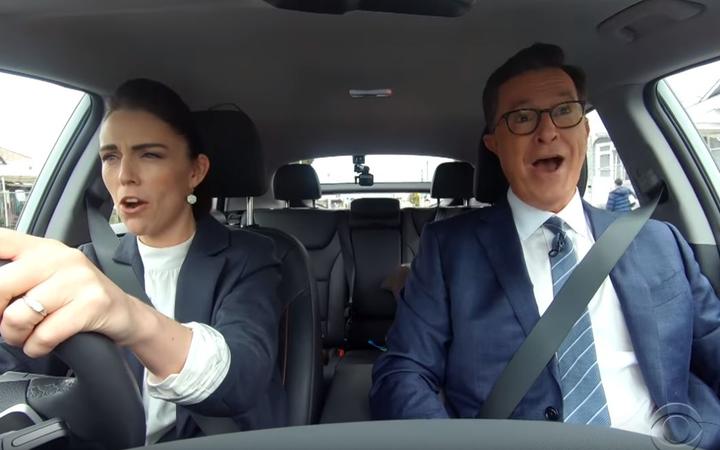 The first episode of what he said would be a week of coverage of the trip began with Mr Colbert being picked up from Auckland Airport by Prime Minister Jacinda Ardern.

They engage in some back-and-forth, do some karaoke to Queen's Bohemian Rhapsody, Mr Colbert accidentally disables Ms Ardern's phone, and they're spotted by another motorist on the way from the airport to her home.

There, they're straight into an interview.

First question: "Can I be a citizen?".

Other topics include Ms Ardern's attempt to be cast in the Lord of the Rings trilogy, New Zealand politeness and lack of snakes, Ms Ardern's engagement to Clarke Gayford, New Zealand elections, the Christchurch mosque attacks and gun law reform.

The majority of the interview is light, and has moments like Mr Colbert offering to be Ms Ardern and Mr Gayford's marriage celebrant, daring Ms Ardern to call a snap election during the interview, and asking whether lack of snakes or women getting the vote was more important for New Zealand.

Afterwards, they had what Mr Colbert called a "New Zealand state dinner of sausages and white bread" - a barbecue.

Musician Lorde joins the party and gets pranked by Mr Colbert - who's still celebrating our lack of snakes.

The visit New Zealand will be highlighted throughout the week on The Late Show with Stephen Colbert.

The Late Show with Stephen Colbert is the US number one show on late night, boasting an average audience of 3.5 million people.

Tourism New Zealand said it expected the visit to generate an estimated $5 million worth of advertising revenue.