The Prime Minister has greeted American comedian Stephen Colbert at Auckland Airport this morning, as she promised to do when she appeared with the host on The Late Show in New York last month. 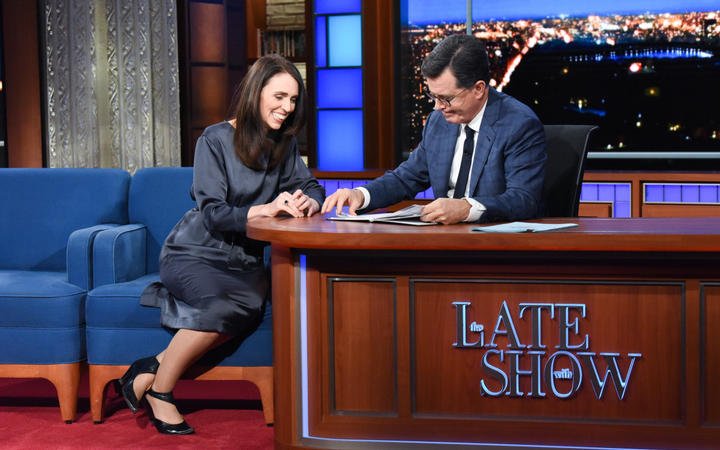 A Tourism NZ spokesperson, Lauren Vosper, said the airport welcome was filmed and will be part of the segments produced for the Late Show, which will air next month.

Ms Vosper said Mr Colbert is filming all over New Zealand but wouldn't confirm how long he was in the country for.

Mr Colbert had been scheduled to make a surprise trip in March, but the plans were shelved after the Christchurch mosque shootings, which left 51 people dead.

Shortly after the attack, Mr Colbert expressed his condolences during a taping and urged people to visit.

The Late Show with Stephen Colbert is the US number one show on late night, boasting an average audience of 3.5 million people.

Ms Ardern has appeared on his show twice already - both times when she was in New York for the United Nations General Assembly.

In last year's broadcast, Ms Ardern invited Mr Colbert to visit New Zealand during an interview on the show and jokingly offered to make the host - a massive Lord of the Rings fan - an official citizen of "Hobbiton".

This year's late night show appearance was a last-minute addition to Ms Ardern's schedule on the final full day of her trip to New York last month.

Mr Colbert introduced Ms Ardern on set, noting that "this time of year in New York you never know when you'll bump into somebody like [the] New Zealand Prime Minister".

Ms Ardern proceeded to tease Mr Colbert for failing to respond to her personal invite for him to visit the country which she issued when she appeared on the programme last year.

"You haven't been yet, which is a little awkward," Ms Ardern said to laughter from the crowd.

The two then chatted as Mr Colbert flipped through his "schedule" to try find an agreeable date.

Ms Ardern ruled out any day this week, saying she was busy with the United Nations - "trying to save the world" - and Mr Colbert quipped that next week was also unsuitable due to "CrabFest".

Mr Colbert went on: "I'm supposed to travel with my crew [the week after] to an island nation south of Australia to film a series of comedy segments.

"What if I cancel that and just go to New Zealand instead?"

Ms Ardern responded: "I'll pick you up at the airport".