Prime Minister Jacinda Ardern will make her second appearance on The Late Show with Stephen Colbert today to announce the comedian will visit New Zealand in October. 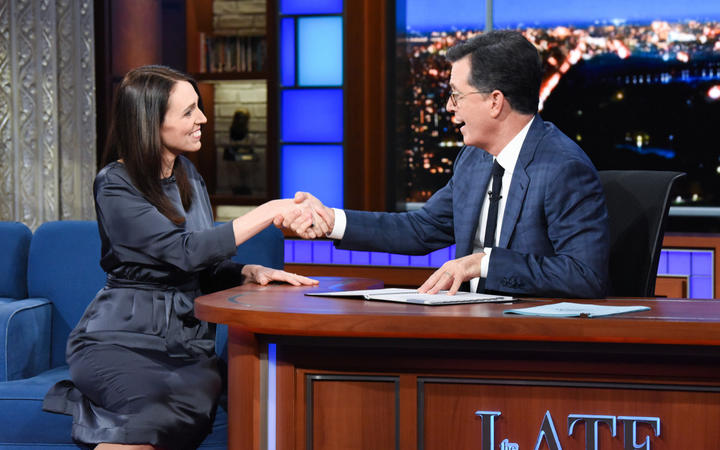 The late night show appearance was a last-minute addition to Ms Ardern's schedule on the final full day of her trip to New York for the United Nations General Assembly.

New Zealand reporters were allowed to attend the pre-recorded segment at the CBS studio near Times Square on Wednesday late afternoon local time.

Mr Colbert introduced Ms Ardern on set, noting that "this time of year in New York you never know when you'll bump into somebody like [the] New Zealand Prime Minister".

Ms Ardern proceeded to tease Mr Colbert for failing to respond to her personal invite for him to visit the country which she issued when she appeared on the programme last year.

"You haven't been yet, which is a little awkward," Ms Ardern said to laughter from the crowd.

The two then chatted as Mr Colbert flipped through his "schedule" to try find an agreeable date.

Ms Ardern ruled out any day this week, saying she was busy with the United Nations - "trying to save the world" - and Mr Colbert quipped that next week was also unsuitable due to "CrabFest".

Mr Colbert went on: "I'm supposed to travel with my crew [the week after] to an island nation south of Australia to film a series of comedy segments.

"What if I cancel that and just go to New Zealand instead?"

Ms Ardern responded: "I'll pick you up at the airport".

The episode - also featuring Hollywood actress Renee Zellweger - was due to be broadcast at 3.30pm (NZT). 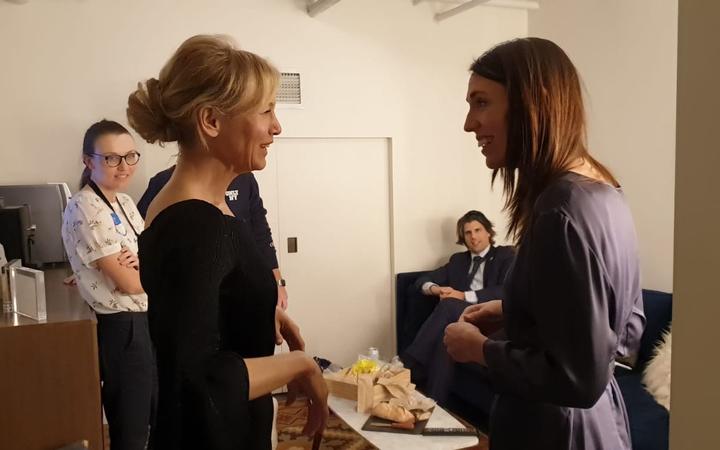 Jacinda Ardern meets Renee Zellweger in the green room before her appearance on The Late Show with Stephen Colbert. Photo: RNZ / Craig McCulloch

The Late Show is the United States' number one show on late night, boasting an average audience of 3.5 million people.

In last year's broadcast, Ms Ardern invited Mr Colbert to visit New Zealand during an interview on the show and jokingly offered to make the host - a massive Lord of the Rings fan - an official citizen of "Hobbiton".

The host had been scheduled to make a surprise trip in March, but the plans were shelved after the Christchurch mosque shootings, which left 51 people dead.

Shortly after the attack, Mr Colbert expressed his condolences during a taping and urged people to visit.

"I just love that country, he said. If you've never been, go. The people there are unbelievably kind and welcoming."

Speaking earlier to RNZ, Ms Ardern said the appearance was a good opportunity to once again promote New Zealand on the world stage.

Ms Ardern has had a slightly lighter international media line-up during her trip to New York this year compared to last, but also found time for an interview on the CBS breakfast show This Morning.

She reiterated the message from her UN address yesterday - urging people to take care of their words - but stressed her speech was not directed specifically at US President Donald Trump.

"I don't say that to point to any one leader - actually that's a duty of care that we all have," she said.

"In this borderless world now, I think we need to be mindful that other countries hear it - kids hear it - and our words, they have impact."

She said she wasn't surprised Mr Trump asked about her government's gun control measures when they had a behind-closed-doors meeting in New York this week.

There was wide interest in the US to New Zealand's response to the mosque attacks, she said.

She told viewers that New Zealanders decided people did not need access to military-style assault rifles.

New Zealand's PM @JacindaArdern is among the leaders in New York for the #UNGA. Her country got global attention for implementing strict gun control measures after the mosque shootings in Christchurch in March.

We spoke to her in an exclusive interview earlier this morning: pic.twitter.com/lqCFuz1Z8G