New Zealand is to launch into negotiations with four other small countries to remove tariffs on environmental goods such as solar panels or wind turbines, and curb fossil fuel subsidies. 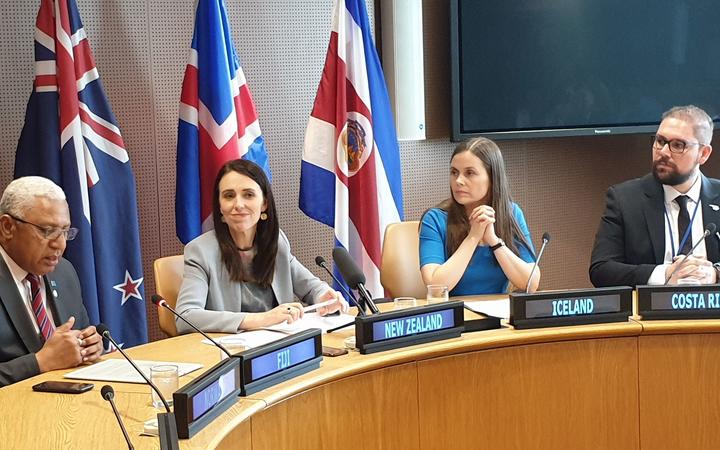 Prime Minister Jacinda Ardern announced the move at the United Nations in New York alongside leaders from Norway, Iceland, Costa Rica and Fiji.

In a press release this morning, Ms Ardern said it would also set up measures to eliminate fossil fuel subsidies.

The Agreement on Climate Change, Trade and Sustainability (ACCTS) agreement intends to:

Ms Ardern could not put a dollar figure on how much a deal would be worth, but the countries involved are far from New Zealand's major trading partners.

She accepted it was a small initiative, but said she hoped other nations would also come on board.

"Trade can't sit outside of our work to tackle climate change. In fact international trade rules are uniquely placed to be part of the solution by removing trade barriers for green products and services and stopping pollution being subsidised," Ms Ardern said.

"Globally, we are subsidising fossil fuel production and consumption to the tune of over $US500 billion a year," she said.

"The establishment of rules on this type of harmful subsidy spending establishes a framework to finally hold us to account. Commitments on elimination show what can be done when countries understand the sense of crisis and urgency and demand to see tangible progress."

She said the plan was to set up an enforceable trade agreement with the status of a treaty.

"One that is transparent, supportive of multilateral rules, open to all who can meet the required standard and that demonstrates in a substantive manner how trade measures can support and drive climate and environmental objectives.

"Our hope is that these kinds of initiatives, beginning first with a small group of countries, and then with an expanding membership, will create the momentum to eventually lead to multilateral solutions - our shared overarching goal."

Climate Change Minister James Shaw told Morning Report starting with a small group of countries meant they could write the rules before inviting other countries to join, speeding up the process.

"Trade agreements have historically pulled in the opposite direction for environmental outcomes - for the first time, these things are coming together now."

He said it was about having a level playing field.

"We've got this prisoner's dilemma at the moment where every country says 'we want to do something about climate change' but no one wants to go first - somebody else has got either a tariff or a subsidy in place. Actually what we need to do is to make sure that we're all moving together."