Moving dairy cows indoors could be part of the answer to bringing down emissions on farms. 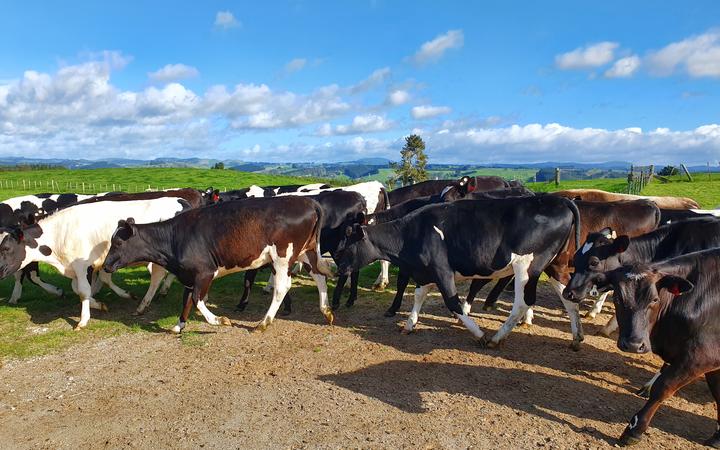 Most methane is produced when cows burp. Photo: RNZ/Sally Round

Farmers faced having five years to come up with their own tool to price and pay for the carbon and methane coming off their properties or being forced by the government to join the Emissions Trading Scheme.

For the first time since the ETS was introduced over a decade ago, there was a very real prospect of farmers being charged for their climate change inducing emissions.

Landscape architect Di Lucas said there had been a lack of leadership on how to bring these down and had drawn up a plan for one Canterbury dairy farm that he said not only reduced emissions, but had the farm becoming carbon neutral by 2050.

This was achieved through planting fruit and nut trees to sequester carbon and with herd homes, or moving cows indoors.

"You can see here that we reduce 20 percent just with the plantings, and then just getting the start with the herd homes, we're down 50 percent. So you know, [it's] substantial, we can move it."

The emissions mountain is knocked off in chunks, some here, some there.

The herd size is reduced but not dramatically, falling over time by 25 percent to 900 cows.

And effluent harvested from the floor of the herd home is sent to something called a biodigester.

"They would still be pasture-based and then there will be cut and carry, and the feed harvesting, the vehicles would all be fuelled by the biodigester, so it's a closed circle."

Most methane was produced when cows burped.

Dr Clark said the best way to reduce it was by including supplements in the cow's feed known as methane inhibitors.

A big advantage with an indoor system was that farmers had better control over the frequency with which cows were eating these inhibitors.

"Alternatively, with a grazing animal you can only give it twice a day. So it only gets it discreetly. To get the full efficacy which in some trials in the United States, we understand that it's close to a 50 percent reduction in enteric methane, if you feed it in every mouthful. If you can only feed it twice a day, it's probably down to less than 10 percent."

Dr Clark said the millions needed to build a herd home and a biodigester was the thing that could make a farmer think twice before aiming for such a lofty goal as being carbon neutral by 2050.

But he said such plans were still useful.

"This is the kind of going the whole Monty, the 'Full Monty', isn't it, we're trying to get to neutral. We're trying to do this by this vastly, you know, modified and changed system of production. But not all of it needs to be done. Perhaps you know if you'd say, well, I want to work on reducing my footprint over time, maybe there are elements of this can be brought in."

For now his organisation was sticking with looking at how to reduce methane using this approach, rather than moving cows indoors.

"If you look at the methane targets for 2030, which I think is 10 percent, then I think the work we've done with farmers in the last four or five years would suggest that we can get to a 10 percent reduction without having to resort to, you know these high capital infrastructure systems."

The Zero Carbon Bill that called for the 10 percent reduction in methane by 2030 was passed on Thursday with support from all parties in parliament.