This month New Zealanders will be able to see the rare transit of Mercury, 250 years after Captain Cook's astronomer observed a similar event. 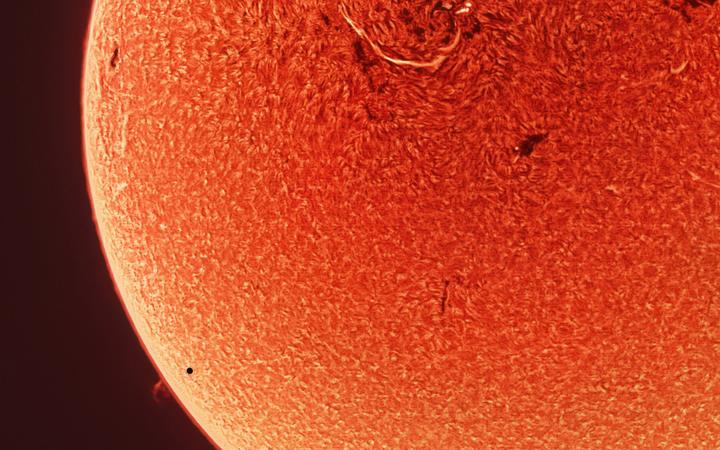 Mercury is only just visible against the sun as a small dark dot on the bottom left of this image taken in May 2016. Photo: AFP

It'll be visible across New Zealand, but only with a telescope, so astronomy societies across the country will be setting up star parties for people to observe the transit, astronomer and Otago Museum director Ian Griffin said.

"On the morning of the 12th of November, as the sun rises, the planet Mercury will be transiting across the face of the sun.

"We thought it would be fun to gather in Mercury Bay, in the same spot that Green saw it, and have an all night star party followed by watching Mercury go across the sun as the sun rises in the morning," he said.

"You won't be able to see it with the naked eye ... you need a special solar telescope.

"In Whitianga we're going to have dozens of telescopes and have a bit of a festival of astronomy all night and then see this amazing thing in the morning."

The planet will appear through telescopes as a tiny dot moving across the sun and people at Mercury Bay will see the last hour of its transit.

Leading up to the transit, Otago Museum and others have organised a week-long road show to the main centres to celebrate the country's the bi-cultural astronomical heritage, with astronomers giving talks on Māori astronomical knowledge and current research.

Mr Griffin said the next time a transit of Mercury would be visible from New Zealand is 2039 "so you'll have a wee time to wait."