An air quality monitor in Auckland's CBD has recorded a sharp spike in the city's air pollution. 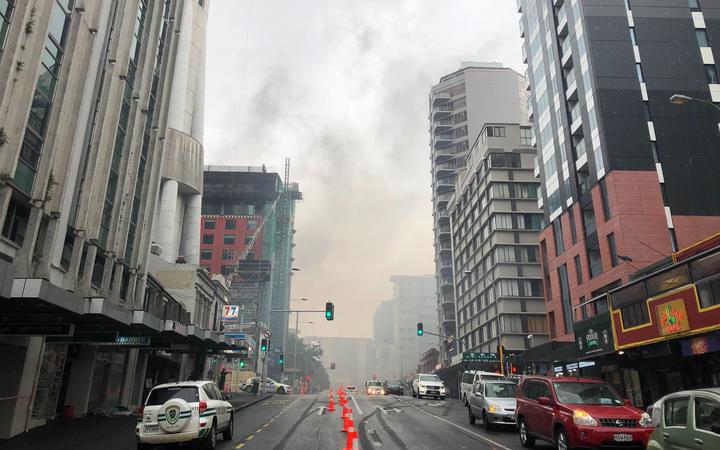 A steady stream of acrid smoke has been streaming from the International Convention Centre, which has been burning for more than 24 hours.

"We don't believe the smoke from this incident is more toxic than other fires, however people, especially the elderly, young children or those with pre-existing health conditions, should avoid it."

Read more of RNZ's coverage on the SkyCity fire here:

"Yesterday, the monitor wasn't showing as high smoke levels as it is today. It's a fixed site monitor so it's very dependent on the weather around it.

"Today the smoke is blowing straight at it so it is dependent on how the wind affects it, because it's in a fixed location and indicates typical levels across the area."

Ms Sinclair said the high result was to be expected as the windy conditions could be concentrating the smoke around the fixed air quality monitor.

"Given the weather conditions today and the fact we've got high winds the smoke is dispersing quite quickly and the air quality away from the smoke plume is not generally any worse than usual."

Auckland Emergency Management is following the advice of the Auckland Regional Public Health Service and encouraging the city's residents and workers to stay out of the smoke.

"If you live in the city centre, please keep your windows closed and turn your air conditioning off. Building managers and bodies corporate are encouraged to support their tenants," Ms Sinclair said.

Anyone experiencing discomfort or irritation should leave the immediate vicinity and if people are concerned or feeling unwell they can contact Healthline on 0800 611 116 for free, 24-hour health advice.