Prime Minister Jacinda Ardern says APEC will definitely still be held in Auckland in 2021, despite the destruction caused by the fire at the NZ International Convention Centre. 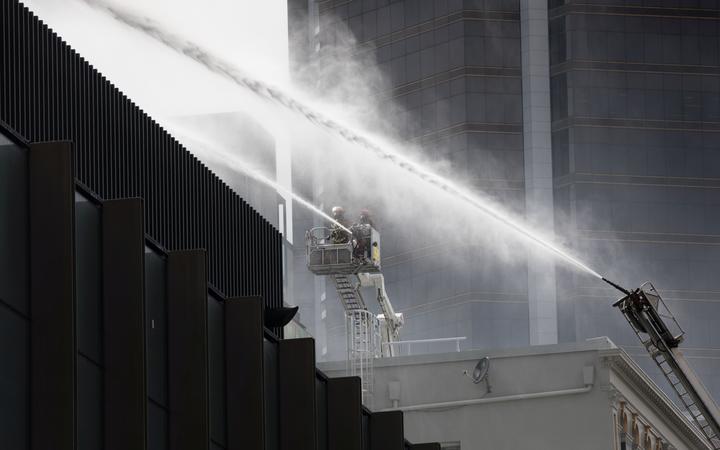 The fire at the construction site of SkyCity's international convention centre has been ablaze for more than a day.

Ms Ardern has met with officials at the scene of the massive blaze in Auckland's CBD this afternoon, before speaking to the media.

Ms Ardern said the first focus was safety, the second focus was the future ability of the international convention centre, but she confirmed that APEC will go ahead.

"APEC in 2021 will still be held in Auckland, there is no question there, simply the question will be where it will be hosted."

She said it will be "hugely disappointing" for all those involved.

"It had come so far, and to now see this major, major setback of course will be a real blow to that workforce. But I know they'll be as committed as everyone here to see that restored.

"You can see from the outside, it has the potential to be a beautiful building, it's unique. Now the plan has to be to restore it," said Ms Ardern.

She said the fire meant central Auckland was "not the city that we're all used to".

"The effect of the smoke has dampened down the activity in the city."

She said the number of businesses that were not able to operate was relatively small.

At the same press conference, SkyCity chief executive Graeme Stephens said they hoped to be open and trading by Friday.

Ms Ardern, who usually spends Wednesdays in the capital, changed her plans to meet with Fire and Emergency. She also met representatives from SkyCity and Fletchers.

'Too early' to say if venue needs to change

Auckland Mayor Phil Goff is among those with concerns the centre will not be ready in time for APEC.

Auckland Tourism, Events and Economic Development chief executive Nick Hill did not rule out the centre hosting APEC, but said there were contingency plans.

The centre was the preferred venue for APEC, Mr Hill said.

"While there have been questions about the impact of the fire on Auckland's ability to host large scale business events at a single venue from 2021 and beyond - and APEC Leaders Week events in November 2021 in particular - the reality is we must wait until the fire is fully extinguished and experts have been able to assess the damage.

"It is too early to make any decisions as to whether the preferred venue needs to change."

It was best not to speculate on any wider impact until the full extent of the fire was known, he said.

"While visitors from around the world and the rest of New Zealand may have concerns after seeing reports of the fire, they should be reassured that emergency cordons are in place to ensure the safety of residents and visitors alike," Mr Hill said.

"Nearby buildings have been temporarily closed for safety reasons around fumes, not due to a risk of the fire spreading."

More than $450 million is estimated to have been spent by people attending multi-day conferences last year, resulting in 855,801 visitor nights.

About 35 percent of the estimated total spend is from international delegates.

The tourism industry said it was uncertain how badly it would be hit by the SkyCity Convention Centre fire.

"We're all devastated, as you know it's a very important piece of infrastructure for Auckland and New Zealand," Ms Sullivan said.

"SkyCity has confirmed their commitment to the vision for this to be an iconic international-standard facility to take Auckland into the future.

"We know that the damage is significant, there will obviously be a delay. But until we're all aware of ... the extent of the fire and the damage and SkyCity is able to advise us of their plans, we don't know timing or the impact on the conference industry."

"There will most likely be further delays of progress and the delivery of the venue which is fairly significant for New Zealand's business/events market, which obviously has already secured a number of big conferences and conventions into that venue," Ms Chen said.

Mr Hill said it was heartening to see the accommodation sector band together to look after displaced visitors.

"Visitors who are due to come to Auckland in the next day or so should contact their travel provider to get an understanding as to whether their accommodation may be affected."

Ms Chen said there was no other convention space quite like it in New Zealand.

"The Auckland one was certainly going to be the biggest, therefore able to really put New Zealand into that international platform in terms of the international convention space."

When contacted for comment, Tourism New Zealand and Tourism Industry Aotearoa told RNZ it was too early to comment.