Court cases in the country's second largest courthouse have been adjourned for the day as the SkyCity fire continues to burn.

Thick acrid smoke has been steadily streaming from the international convention centre for more than 24 hours now.

The Auckland District Court, located downwind from the fire one block away, closed its doors today over concerns about air quality in the CBD.

The closure affects about 250 Ministry of Justice staff connected to the courthouse, which hears about 11,000 new cases per year.

Chorus House and Swanson House, which host other courts and the Public Defence Service, are also closed to ensure staff and public safety.

He said affected persons had been informed and advised of future court dates while other matters were being transferred.

"Overnight arrests have been transferred to the North Shore District Court and urgent Family Court without notice applications are still being progressed." 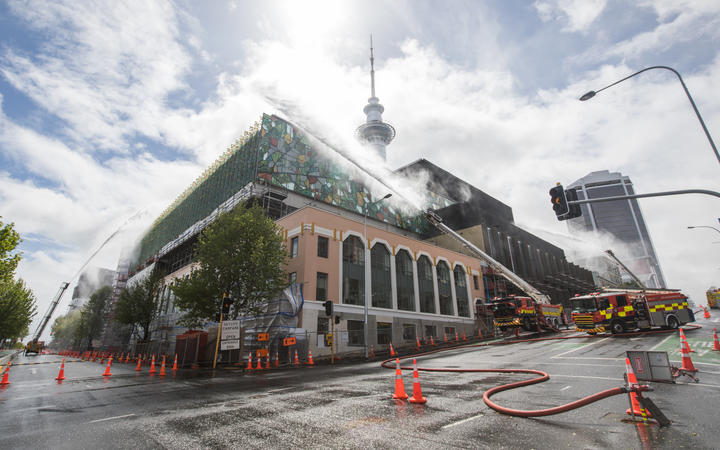 The fire in Auckland CBD has been burning for over a day. Photo: RNZ / Cole Eastham-Farrelly

A coronial inquest of the death of 21-year-old Sentry Taitoko, for which his whānau had travelled from Australia for, was also being adjourned for the day.

"Proceedings have been transferred to Waitākere District Court in the meantime, and we will continue to work around this situation as it develops.

"This has not impacted on our day to day business. We are in regular consultation with the Ministry of Justice as to when the Auckland District Court will reopen."

Mr Crafar said anyone who was expecting to attend court with questions or concerns could call the call centre on 0800 COURTS.