A rough sleeper in Hawera has unwittingly found himself front and centre of the South Taranaki mayoralty race. 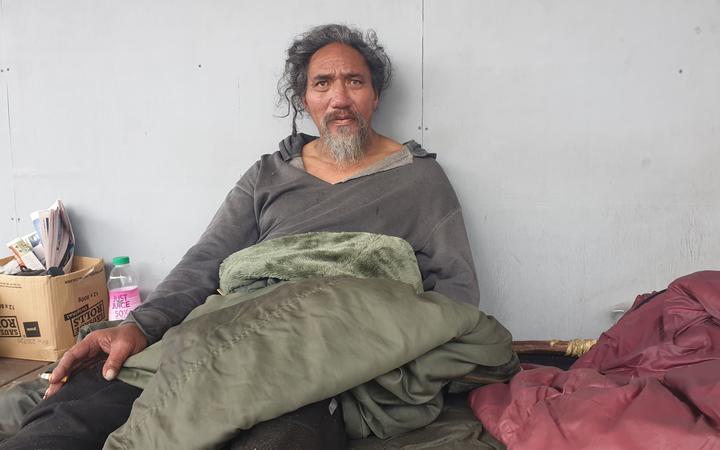 Mayoral aspirant Craig Baylis said if he was elected the man known to locals simply as Derek would have to go.

In turn, Mr Baylis has been accused of making cheap political capital out of one of the town's most vulnerable residents.

Derek has been a fixture in front of an empty shopfront on Hawera's High Street for about two years.

He can usually be found perched on an old foam mattress, wrapped in sleeping bags, often smoking a cigarette.

Most Hawera residents say he's harmless - and although they desire a better life for him - they don't want to see him kicked out.

But Mr Baylis, one of three candidates vying for the South Taranaki mayoral chains, said Derek's time was up.

A local retailer, Mr Baylis, declined to speak to RNZ but was unequivocal when spelling out his position to NZME's Hokonui Taranaki radio station.

"I've got a pretty non-negotiable view on the vagabond. Look my view on Derek is pretty black and white and this isn't going to be everybody's kettle of fish, but Derek has to go.

"If I am successful in my mayoral run I can tell you right now I will use every resource available to me as the mayor to remove Derek from that main street and it's not just Derek - it's anybody."

Mr Baylis said he would introduce a bylaw to prevent people from squatting in town and was prepared to personally move Derek on.

"That's exactly right. I'd pick him up and carry him myself. That might be a bit of a smelly job. He's got to go."

Mr Baylis said $15 million was about to be invested in downtown Hawera and having rough sleepers on the street sent the wrong message.

Incumbent mayor Ross Dunlop - who is not standing again - said Mr Baylis failed to acknowledge the complexities of Derek's situation.

"There's actually been a lot of effort going into working with Derek and trying to find him alternative accommodation.

"I mean you are dealing with a person that does have a lot of issues and it's just not simple."

Mr Dunlop said a bylaw was a blunt instrument that had not worked elsewhere.

He also took issue with Derek being used as a political pawn.

"I think it is rather unfortunate to use one of our more vulnerable members of our community for political advantage. I certainly don't support and agree with that stance."

Current councillor and mayoral candidate Clem Coxhead did not like Derek being dragged into the battle for office either.

"I dislike using people for your own publicity purposes and I'm sure that on reflection that wasn't something that was wanted to be achieved, but we must stand on issues, not on people."

Current deputy mayor and another mayoral hopeful Phil Nixon was also no fan of using a bylaw to solve rough sleeping.

"Often communities are judged on the way we treat our most vulnerable and I think we need to work with these sorts of people who find themselves on the street for whatever reason. Work with them, work the appropriate authorities." 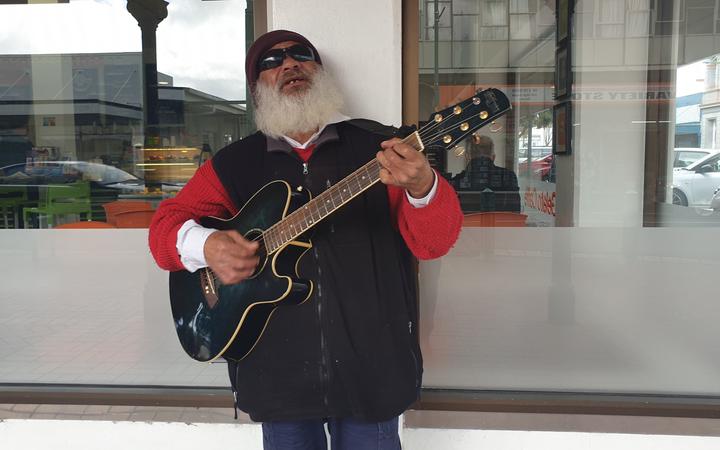 Meanwhile, on the streets of Hawera there were mixed views on Mr Baylis' comments.

Joe, a busker playing across the street from Derek, said he had experienced life on the streets.

"You know when it comes to people on the street ... they've got nowhere to go. Where are they going to go?"

"But I mean we've been trying to do that for two years so what's the answer?"

Terri reckoned the tone of Mr Baylis' comments was all wrong.

A point picked up on by Sandy.

"I was disgusted really. Just the way it came across. You don't just go and push somebody off the street."

Stacey, a manager at the Postie Plus outlet across the road from Derek said he was harmless.

"Derek is no harm to anybody. He just sticks to himself and he'll smile at you and wave at you if you wave to him. He's never been a problem for us."

She thought Mr Baylis' comments reflected poorly on him.

"I don't think he should run for mayor really after what has happened. A lot of people are against his comments so good luck to him."

South Taranaki voters will get to have their say on Mr Baylis' plans at the local government elections in October.