The mayor of Buller District says expected swells this weekend could breach an old coal mining dump filled with asbestos and industrial waste. 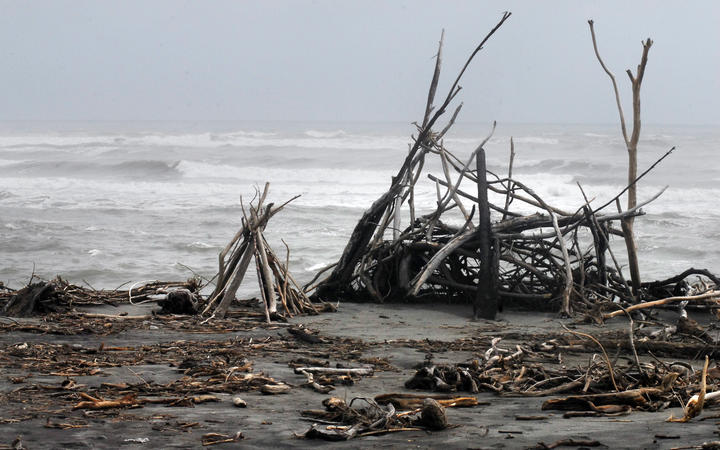 Swells up to 10 metres are expected to hammer the South Island's West Coast this weekend. Photo: 123RF

Civil Defence is warning that hazardous swells close to 10 metres will hammer the West Coast.

Mayor Garry Howard says an ex-state mine dump at Hector is at risk of being clawed open by the sea.

He said the council had been asking for help from the government to fix the site, but it's sitting on its hands.

The region's emergency management director, Mark Crowe, said the public should abandon any coastal activities planned for the weekend.

Low-lying areas from Haast to Karamea were particularly at risk, he said.

It's not just the South Island facing large swells.

MetService says waves of up to six metres on the west coast of the North Island today could become dangerous.

Auckland: The combination of King Tides & large combined waves (extreme seas + heavy swells) are likely to produce unusual wave "run up" onto the western beaches this weekend. Take care, as this type of rogue wave can catch you out ^GG @AucklandCDEM @aucklandcouncil pic.twitter.com/uONQ0SFbP0

People have been told to stay away from beaches from Kaipara to Taranaki.

MetService has also issued coastal gale warnings the the majority of the country, as well as storm warnings for the seas from Foveaux Strait to Jacksons Bay in south Westland.

Meanwhile, severe weather and road snowfall warnings are in place for the South Island.

MetService has forecast severe gales for central and southern parts of the country, with heavy rain and snow for parts of the South Island.

The West Coast of the South Island is already experiencing strong winds. An 83km/h gust was recorded at Westport at 10am and it's going to get even stronger this afternoon. The highest gust so far today is 161km/h at Secretary Island in Fiordland! https://t.co/qHyE5zhh6X ^SG

State Highway 94 from Te Anau to Milford Sound is closed due to heavy snow.

Fiordland and southern parts of Otago will get snow above 500 metres.

Road snowfall warnings are in place for Crown Range road, Milford Road, Lewis, Arthur's, and Lindis pass, as well as the Desert Road in the Central North Island.