Nary a flipper, fin or feather was spotted by DOC rangers at Wellington's central train station this morning. 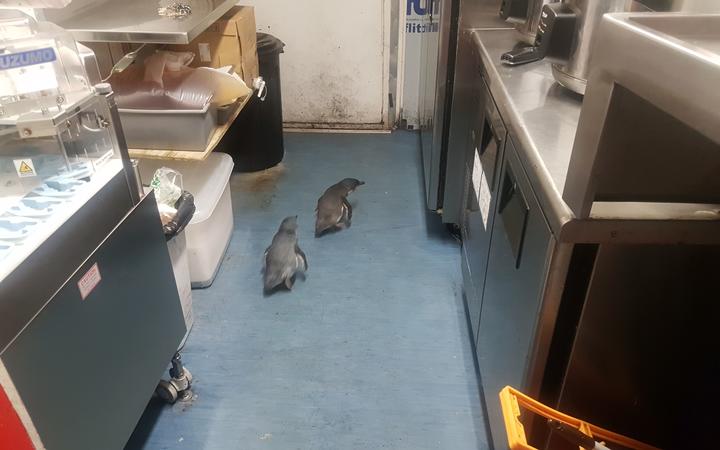 Rangers are on the lookout for Little Blue Penguins, after two had to be removed - twice - from under a sushi store near the main railway station yesterday, and put in a nesting box on the waterfront.

DOC senior ranger Robert Ashe checked the area around the sushi shop about an hour before sunrise, but the penguins had started their day much earlier.

"They've probably gone out to sea to swim where they fish, and start the day filling up their bellies with food, getting in prime condition for nesting," Mr Ashe said.

He helped relocate the pair to a new nesting box, among the rocks on the harbour's edge, last night.

"I was just providing them some nesting materials so they could make a better home there ... when we put them in the box they came out, checked out the neighbourhood. And then they went back into the box and started cooing to each other which is a really good sign that they're comfortable and relaxed."

Watch: Penguins get relocated from Wellington sushi bar to nest box on waterfront

Kororā, which grow to 25cm tall and weigh about 1kg, were pairing up and looking for a good nest at the moment. If they liked it, they would return night after night and their chicks would also return to the area to make their own nests, DOC said.

"Hopefully we've given them enough hints this is not a suitable place," Mr Ashe said.

The response to the two penguins has so far involved several police officers, DOC rangers, passersby, the odd journo, and now international media are also flipping out over the story.

All that was an over-reaction said one taxi driver, who parked next to the sushi shop about 5am each day.

"Cops come in and they're shining the torches and everything... I give this lady a New World bag in case they come out so she could stick 'em in her bag, but they never come out," he said.

He offered an easier way to catch penguins for the impatient.

"You shoulda just got the fire department here and hosed them out. They won't drown 'cos they're bloody penguins," he said.

But Scratch, who had stopped by on his way to work, thought the penguins were a brilliant addition to the cityscape.

"They're great things aren't they... What a great place Wellington is becoming, kākā flying over, tūī flying past you and now penguins walking up the streets," Scratch said. 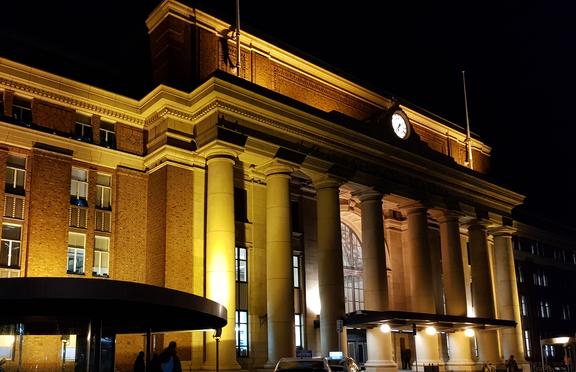 Mr Ashe said while the birds' conservation status was at-risk and declining, their return around the harbour was proof of the volunteers' efforts in pest trapping.

"We're seeing this real re-wilding of our urban spaces and it's just lovely, because these birds and animals were here before us and now they're coming back. We're just learning new ways to live with them," he said.

On the other hand, there was more the could be done for the safety of kororā - which cross busy roads twice a day to reach the shelter of a bush, Mr Ashe said.

"Ōamaru has a really interesting penguin area and they've actually created special culverts that go under the roads for penguins to cross safely under roads... if we think really carefully around how we live with penguins and build infrastructure that's compatible with them, we can have both: we can have our roads and our penguins," Mr Ashe said.

However, the Wellington City Council said such roads were probably too expensive and disruptive to install.

"The installation of penguin nest boxes and penguin nest-friendly planting all around the coast aims to try to entice the penguins to stay on the seaward side of the road," a Wellington City Council spokesperson said.

"As part of the recent Worser Bay Yacht Club project we have installed a pipe to allow access to a fenced nesting site. The Niwa site at Greta Point has similar pipes under a pathway.

"Unfortunately, the cost of installing penguin culverts under roads is probably too expensive and disruptive - especially given there's a fairly low chance the penguins would find and use the culverts."

In the meantime, Mr Ashe urged drivers to be careful at dawn, dusk and night on coastal roads; and for dog owners to keep their pooches under control.