Thousands of emperor penguin chicks drowned when the sea-ice they were being raised on was destroyed in severe weather. 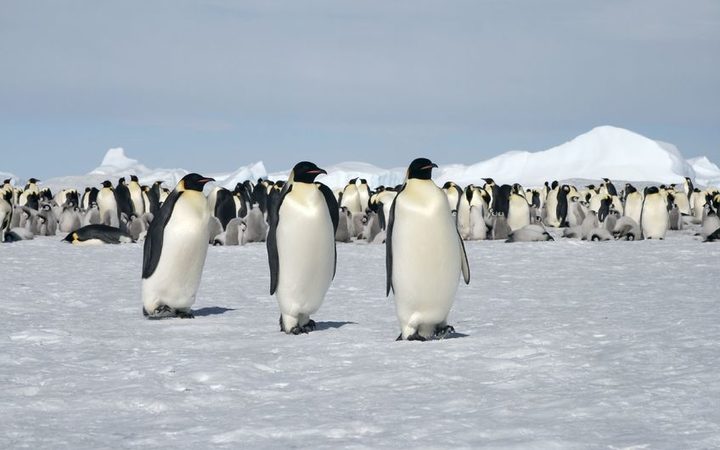 Emperor penguins are the largest penguin in the world, and only found in Antarctica. Photo: 123RF

The catastrophe occurred in 2016 in Antarctica's Weddell Sea.

Scientists say the colony at the edge of the Brunt Ice Shelf has collapsed, with adult birds showing no sign of trying to re-establish the population.

And it would probably be pointless for them to try, as a giant iceberg is about to disrupt the site.

The dramatic loss of the young emperor birds is reported by a team from the British Antarctic Survey (BAS).

It is possible even from 800 kilometres up to spot the animals' excrement, or guano, on the white ice and then to estimate the likely size of any gathering.

But the Brunt population had essentially disappeared overnight, despite previously sustaining an average of 14,000 to 25,000 breeding pairs for several decades (5 to 9 per cent of the global population).

Emperors are the tallest and heaviest of all penguin species, and need reliable patches of sea-ice on which to breed, and this icy platform must persist from April, when the birds arrive, until December, when their chicks fledge.

If the sea-ice breaks up too early, the young birds will not have the right feathers to start swimming.

This appears to have been what happened in 2016.

Strong winds hollowed out the sea-ice that had stuck hard to the side of the thicker Brunt shelf in its creeks, and never properly reformed. Not in 2017, nor in 2018.

Dr Fretwell told BBC News: "The sea-ice that's formed since 2016 hasn't been as strong. Storm events that occur in October and November will now blow it out early. So there's been some sort of regime change. Sea-ice that was previously stable and reliable is now just untenable." 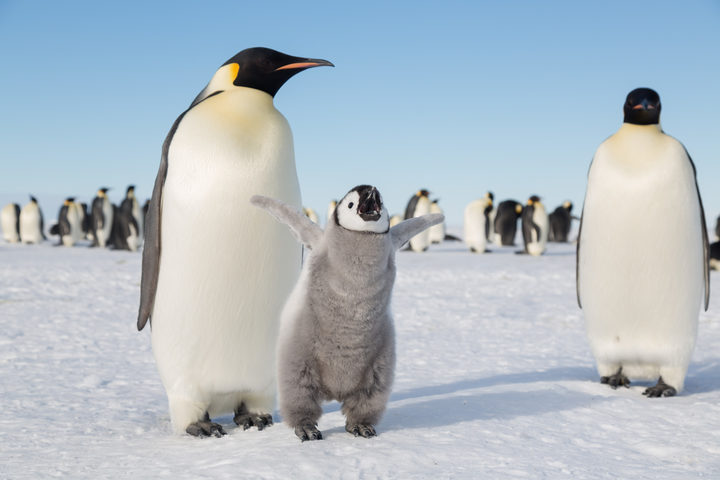 The BAS team believes many adults have either avoided breeding in these later years or moved to new breeding sites across the Weddell Sea. A colony some 50km away, close to the Dawson-Lambton Glacier, has seen a big rise in its numbers.

Quite why the sea-ice platform on the edge of the Brunt shelf has failed to regenerate is unclear. There is no obvious climate signal to point to in this case; atmospheric and ocean observations in the vicinity of the Brunt reveal little in the way of change.

But the sensitivity of this colony to shifting sea-ice trends does illustrate the impact that future warming in Antarctica could have on emperor penguins in particular, says the team.

Research suggests the species might lose anywhere between 50 per cent and 70 per cent of its global population by the end of this century if sea-ice is reduced to the extent that computer models envisage.

Dr Trathan said "what's interesting for me is not that colonies move or that we can have major breeding failures - we know that. It's that we are talking here about the deep embayment of the Weddell Sea, which is potentially one of the climate change refugia for those cold-adapted species like emperor penguins.

"And so if we see major disturbances in these refugia - where we haven't previously seen changes in 60 years - that's an important signal."

Whether the Halley Bay colony specifically really had a future is a moot point.

The Brunt Ice Shelf is being split apart by a developing crack.

This chasm will eventually calve an iceberg the size of Greater London into the Weddell Sea, and any sea-ice stuck to the berg's edge may break up in the process.

The emperor penguing colony could have been doomed regardless of what happened in 2016.

Doctors Fretwell and Trathan reported their investigation in the journal Antarctic Science.