Balinese developers are set to start building a five-storey "restaurant and monument" on the site of the Sari Club, where 202 people were killed when a car bomb exploded in 2002. 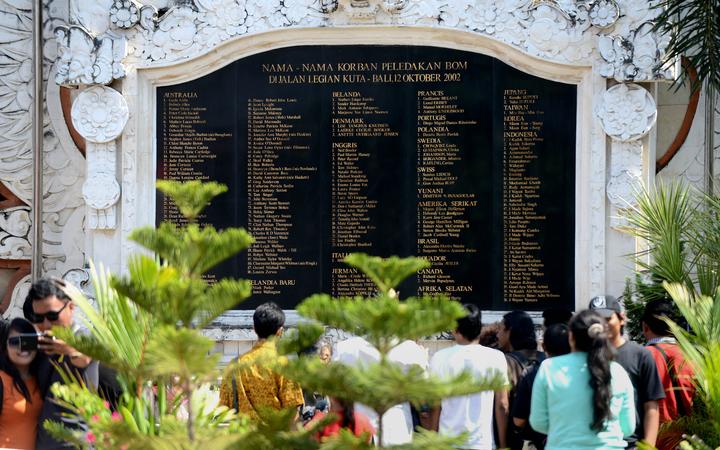 Tourists look at a large marble plaque listing the victims as they visit the Bali bombing memorial on the 13th anniversary of the 2002 blasts. Photo: AFP

Among those who died in the terrorist attack were 88 Australians and three New Zealanders.

A building permit has been issued and local vendors, who have been using the vacant lot, have been told to "clear out" next week, with construction expected to begin on May 9.

Survivors of the Bali bombings, who have been working for more than a decade to establish a peace park on the site, are shocked about the development as they had been assured the lot would never be used for commercial purposes.

"We definitely can't let that happen," said Gary Nash, who was inside nearby Paddy's Bar when the first bomb went off.

With the building plans for the development shrouded in secrecy, he fears the restaurant will end up as a multi-storey nightclub.

"That's an insult to everybody. Not only the Australians who were killed there but everybody - all the other nations who had people killed there - that land should be sacred, it should be kept apart," Mr Nash said.

Ever since the debris from the blasts was cleared away the site has been used as a carpark, with several small kiosks also operating there.

'A degree of deception, confusion'

Multiple attempts by survivors and other interested parties to secure the site to create a place of reflection amid the throng of Kuta's main strip have been thwarted.

"I think there's [been] a degree of deception, confusion and the ground kept shifting all the way through the process," said the chairman of the Bali Peace Park Association, David Napoli.

"We've encountered a great deal of resistance from the [site] owners. One of the issues has been our inability to get in contact with the owner, and have a face-to-face conversation," Mr Napoli said.

"Once construction begins, of course, I think we've lost any hope of achieving our goal of a memorial park for those victims killed."

Mr Napoli said the most upsetting element of the proposal is that local authorities, including the previous governor, gave ongoing assurances that the site would be reserved as a place to remember the victims.

"They were actually very clear for many, many years in stating that no commercial building would be put on that property. It was reserved for a peace park or a memorial park," he told the ABC.

There has been some discussion that the fifth floor of the building will include a memorial.

Concerned over lack of transparency

A local government sign, which will be erected at the site, describes the project as a "Restaurant and Monument".

But that has failed to ease the concerns of the survivors.

"It's the owner's way of making provision for a peace park, but it is totally unsatisfactory and defeats the purpose," Mr Napoli said.

Some Bali locals are also concerned at the lack of transparency.

The head of Kuta's Institute for Community Empowerment, I Gusti Agung Made Agung, said he would like the owner of the land to talk to local people about what is planned.

"The [construction of a] monument is very important for us so that the world can remember with us," Mr Agung told the ABC.

"It was an historic event that occurred there and it hurt us, both as Balinese and Indonesians. And we can't just forget that."

He vowed his community would fight for the establishment of a memorial "at all government levels" because of the positive contribution Australians have made to Bali.