Ten weeks since an old landfill burst open into the Fox River, a small group of volunteers are still filling up to 40 rubbish sacks a day with washed-up waste. 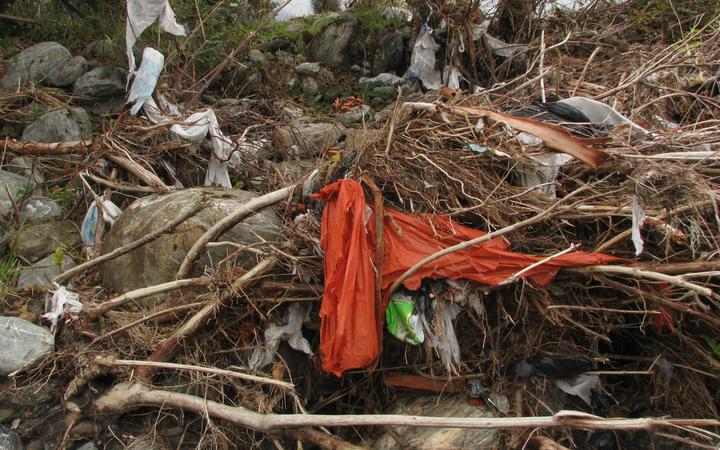 The South Westland Coastal Cleanup group say it is imperative that some sort of organisation step in to help them, or it will take years to clean up all the rubbish.

The volunteers are no longer getting any funding from the Westland District Council or from the government and are closing their Givealittle Page on Friday as they consider how best to continue.

Volunteer co-ordinator Kelsey Porter said the cleanup initially focused on beaches due to concerns about contaminated rubbish in the river, after asbestos and needles were found. Volunteers have finally been given the green light to work in the Fox River to collect as much rubbish as possible before it washes out to the beach.

She said that job had proven "really overwhelming," for the small group of remaining volunteers. Up to six people were heading out to the river each day to tackle what has been dubbed the New Zealand's worst ecological disaster since the Rena oil spill.

"Where we have to clean is at least 23 kilometres long of riverbed. We've cleaned like, at most, a kilometre of it I would say ... and [the rubbish] is really difficult to pull out," Ms Porter said.

Some dead wildlife has turned up, and a huge amount of rubbish is continually spewing out into the ocean.

"That's a whole separate job that we can't even wrap our heads around at the moment," she said.

The group's Givealittle page has amassed more than $6300 in donations and shown "just how much people from far away care", Ms Porter said.

What they are hoping for most is that an organisation with some environmental knowledge will step in and put a large-scale cleanup strategy in place.

National Party environment spokesperson Scott Simpson said the onus was on the government to deliver more "tangible" support, and his party has started a petition to try to force the government's hand.

Ms Porter said it is inevitable that the cleanup has become a political issue, but what needs to be recognised is that it affects far more than just the people of Westland.

"This is a national and global issue," she said.

"Once the rubbish hits the ocean, it's going all over the Pacific, and we know that it ends up in these gyres out in the Pacific, that are just like a plastic Island. So we're paying the consequences onto the rest of the world by inaction."