A group of Rotorua students performed a haka on a battlefield near Passchendaele in Belgium to mark the unveiling of a pou maumahara, or memorial carving, 101 years after the guns fell silent in Flanders. 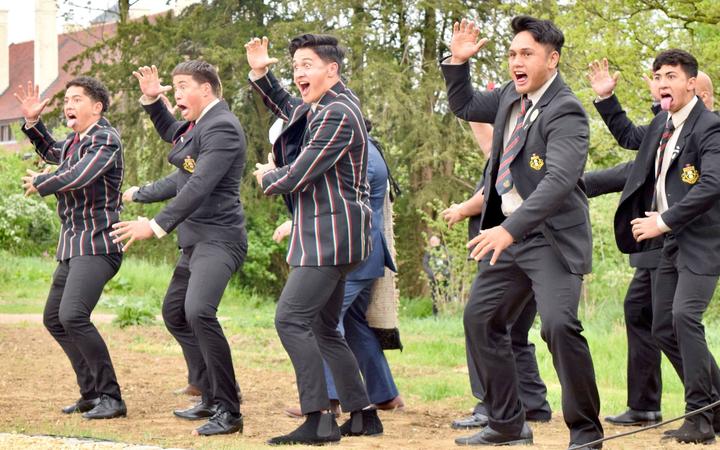 Students from Rotorua Boys High School perform a spirited haka at the unveiling of the pou maumahara in Zonnebeke on Anzac Day. Photo: Supplied / George Driver

On Anzac Day, the 8m tall carving was unveiled in a ceremony at Passchendaele Memorial Park in Zonnebeke, between Ypres and Passchendaele.

Hundreds of New Zealanders, Australians and Belgians gathered in Flanders to commemorate Anzac Day at memorials throughout the region. 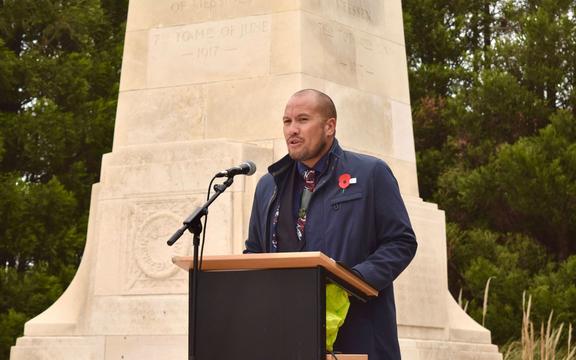 Waiariki MP Tamati Coffey attended the pou unveiling and said it was an enduring way to commemorate the Māori Pioneer Battalion and other New Zealanders who served on the Western Front.

"Here on the Western Front, New Zealand made its greatest contribution and suffered its greatest loss of life," Mr Coffey said.

"This pou is a powerful symbol of the connection between our communities. New Zealand will always be connected to this land and people." 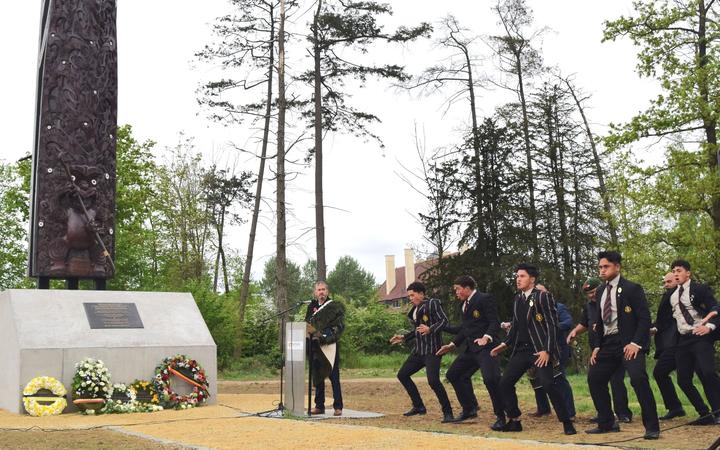 Students from Rotorua Boys' High School attended the ceremony and performed a haka after a formal blessing of the carving.

The students were part of a rugby team that had been touring Europe.

School senior master Gordon Hunt said the students were humbled by the experience.

"It's such an honour for the students to be here for this occasion," Mr Hunt said. 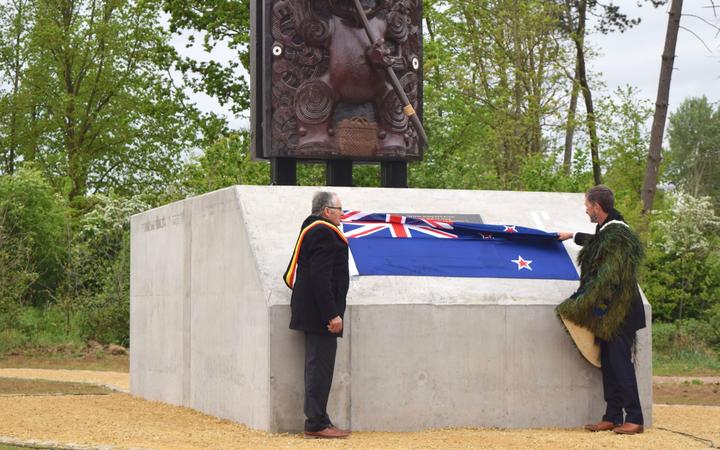 The carving was created by the New Zealand Māori Arts and Crafts Institute (NZMACI) in Rotorua.

At the unveiling, board member David Tapsell said his grandfather served in the Māori Pioneer Battalion and his great uncle was killed in the Battle of the Somme.

He said the service of Māori in the war was remarkable given the unjust way many Māori were treated by the New Zealand government in the 1800s. He also paid tribute to those who refused to fight.

Mr Tapsell said the site was fitting as the Māori Pioneer Battalion was formed near Zonnebeke, on 1 September 1917, after having been part of the NZ Otago Mounted Rifles.

More than 2000 Māori served in the Māori Pioneer Battalion and 336 died on active service, while 734 were wounded. 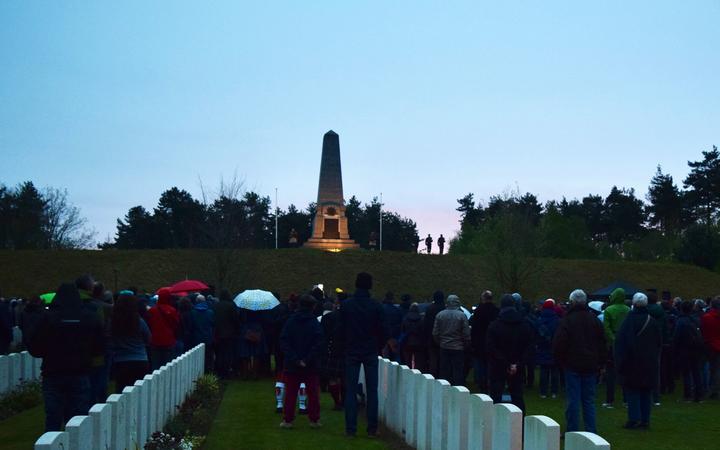 The unveiling ceremony followed a dawn service at Buttes New British Cemetery in Polygon Wood where 162 New Zealanders and 564 Australian soldiers are buried.

At the service, president of the Australian Senate Scott Ryan paid tribute to the victims of the Christchurch terrorist attack last month.

"We stand in solidarity with New Zealand and are filled with admiration at New Zealand's response [to the Christchurch terrorist attack], which reminds us how peace and compassion [are] more powerful than hate and violence," Mr Ryan said. 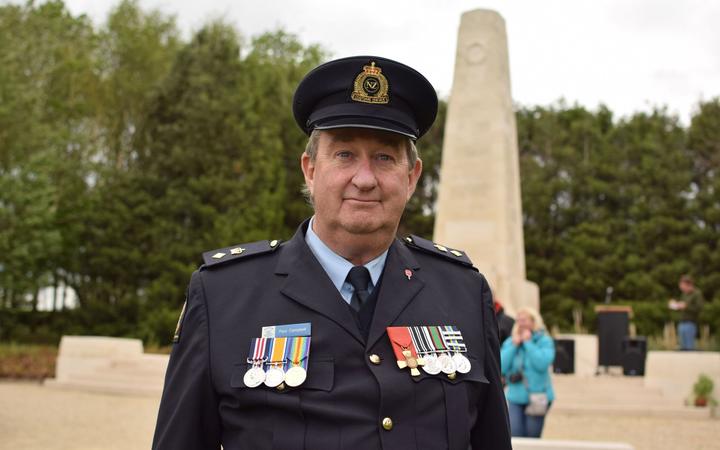 New Zealand Customs attaché to Belgium Paul Campbell attended the ceremonies wearing the medals of his grandfather Talford Brown who was injured in the Battle of Passchendaele. Mr Brown served in the Wellington Regiment and fought in Belgium and France.

"I always said I would bring his medals here, where he fought and where his comrades are buried," Mr Campbell said.

Mr Brown fought in the Battle of Broodseinde, near Zonnebeke, and was wounded after being hit by shrapnel on 12 October 1917, during the battle.

About 843 New Zealanders were killed and about 2700 wounded that day, the greatest loss of life in one day in the country's history.

"He was awarded a military medal for bravery for continuing to fight after being wounded, but he would say he was just looking after his mates," Mr Campbell said.

Mr Brown was just 17 when he enlisted and 20 when he was injured at Passchendaele. After recovering from his injuries, he went back to the frontline to fight again. 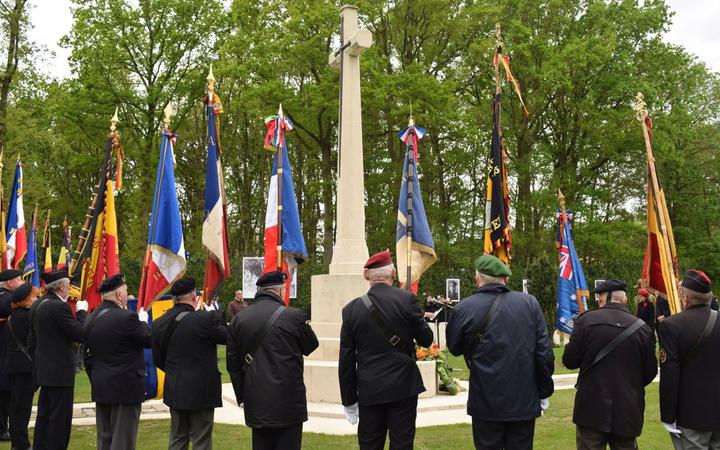 The events were part of an entire day of Anzac commemorations in Flanders, which included wreath-laying ceremonies at the Menin Gate in Ypres, the New Zealand Messines Ridge Memorial, where about 700 New Zealanders were killed in the Battle of Messines, and Berks Cemetery, where the Anzac soldiers were based in 1916 and 1917 and 80 Kiwi soldiers are buried.

During the war, 4600 New Zealand soldiers and more than 12,000 Australian soldiers were killed in Belgium. 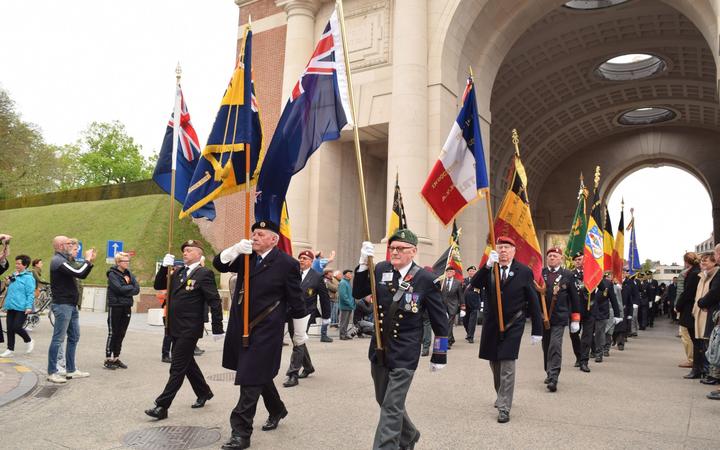 The street procession to the Menin Gate in Ypres, where the names of nearly 55,000 soldiers whose graves are unknown are inscribed. Photo: Supplied / George Driver