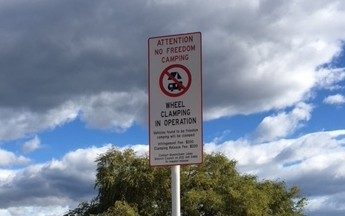 The Responsible Campers Association Incorporated has announced it will be investigating why instant infrigements do not appear to work, with the majority of fines issued by councils around the country going unpaid over the past few years.

A spokesperson for the group, Bob Osborne, says some tourists appealing fines leave the country before they can complete the process.

But other fines go unpaid without any explanation.

The group is asking people to fill out a form on their website if they have received a fine for freedom camping.

In January, RNZ reported that hundreds of fines had being dished out across a number of the big tourist hotspots.

Over summer, 2490 infringements were issued in the South Island alone, with 60 percent of those in the Queenstown Lakes District.

In late March, South Island authorities said the summer past had been the best yet for freedom camping - with improvements in behaviour and central government support.

However, those at the coal face were not convinced and many of the island's pressure points remained under strain.