By George Block for the Otago Daily Times

A Dunedin man and his dog are back living in their fire-damaged home, which has holes in the walls and no power, following an unsolved arson two months ago. 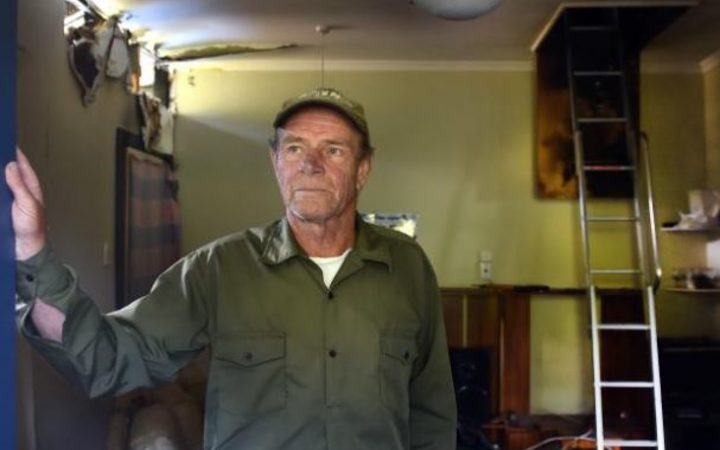 Trevor Diehl is back in his fire-damaged Dunedin home two months on from a suspected arson. Photo: Peter McIntosh/ Otago Daily Times

However, neighbours in the tight-knit Northeast Valley street have rallied around him.

They are preparing to help fundraise to make the house liveable again after a structural engineer found this week that it could be repaired, while yesterday a plumber reconnected his mains water.

Trevor Diehl was asleep in his Beechworth St home early on 12 January this year when he heard the loud bang of a gas cylinder exploding.

He rushed outside to find his carport ablaze and flames lapping at the side of his house.

Two men walking home from a night out raised the alarm and firefighters were able to extinguish the blaze before it completely engulfed the home, but it was extensively damaged.

The flames burnt cladding, wiring and plumbing, while firefighters smashed windows to douse the fire.

A fire investigator determined it was, in all likelihood, deliberately lit.

The case was passed to the Criminal Investigation Branch, but no arrest has been made.

To make matters worse, in the weeks before the fire Mr Diehl had let his insurance lapse to buy Christmas presents, as money was tight for the former joiner, now on an invalid's benefit.

"Stupidest decision I ever made," Mr Diehl said.

In the aftermath, neighbours gave him and his dog, Moxi, a place to stay, but last week they returned home, to a house without power or water.

His neighbour, Cindy King, who regularly takes him dinner, is determined to help.

She is one of several neighbours who have banded together, offering to do washing and prepare meals for him, and she is finalising a Givealittle page.

''We're really just trying to put together a plan forward for him... there's a lot of support and people have come forward with good offers. It's being able to pull it all together.''

Staff arranged for a structural engineer to visit, who advised that although the house was fire damaged, it remained structurally sound, and Mr Diehl could stay at his home.

"While there [was] no running water at the property, Mr Diehl [was] working on getting this fixed promptly so the DCC has no further role at this stage," Mr Henderson said.

"This means Mr Diehl can still live in the house for now."

Ministry of Social Development southern regional director Steph Voight said it had provided Mr Diehl with a cellphone in January, and discussed emergency housing with him last week, but he wanted to return home.

He was entitled to up to $1000 to replace essential items lost in a fire, she said.

"We are meeting Trevor again this week to see if there is more we can do for him," Ms Voight said.

Mr Diehl said he was thrilled the house he inherited from his mother was able to be rebuilt.

The grant was yesterday used to enlist the services of a plumber, who reconnected his running water.