Some Tasman residents will not be able to return to their homes today because of forecast strong winds. 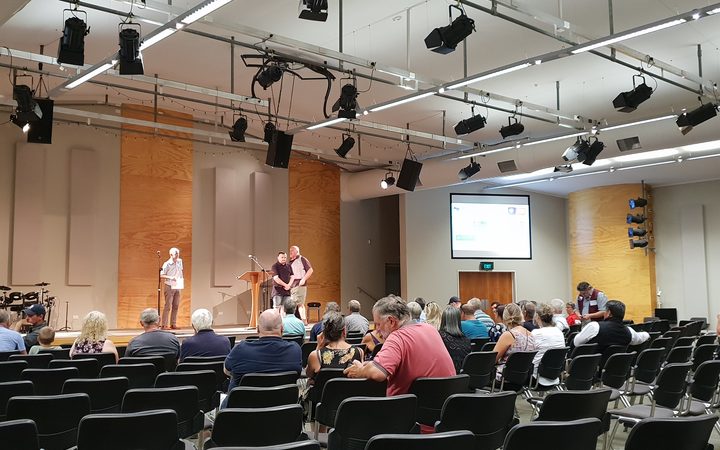 Residents still affected by the Nelson bush fire were briefed by officials at the Hope Community Church yesterday. Photo: RNZ

Yesterday, 14 Pigeon Valley households headed back for good, but must be on alert to leave if the big fire flares up again.

Some other properties in Redwood Valley, Eves Valley and Teapot Valley had restricted access from 8am until 2pm yesterday. However, authorities said this morning there would be no restricted access again today because of fears over the winds.

"We understand that this will be a disappointment for many residents, however, safety is the paramount consideration," Civil Defence Controller Roger Ball said.

He said the situation would be reassessed tomorrow. 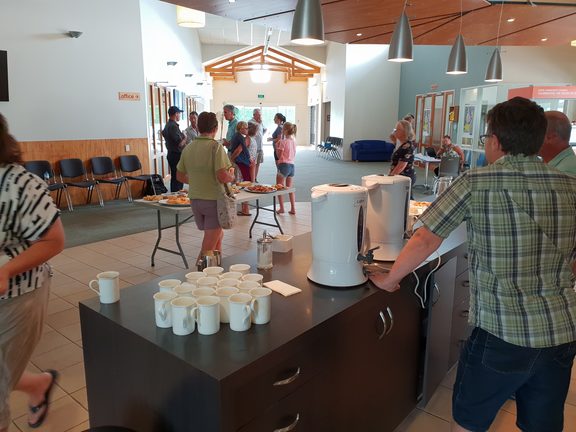 Afternoon tea was laid on for those residents seeking an update on returning to their homes. Photo: RNZ

Redwood Valley residents Ian and Maureen Grage have been out of their home since the fire began and are staying with friends in Nelson.

They, along with about 30 other affected residents, were at a meeting at the Hope Community Church yesterday.

The church has been buzzing with activity, and a lot of food has been donated for the evacuees.

Pastor Mark Fryer said people were tired and wanted to head home, but they were being resilient about it.

"There's a lot of patience I think, recognising there's a major job to be done, especially with the trees and the thermal hot spots that are happening. Those are slightly longer term issues."

Mr Grage said it was great to get back yesterday - even for just a few hours - and be assured everything was okay.

"There's a bit of smoke up there, not a lot though, it's not too bad ... in fact, you could stand there and you wouldn't think anything had happened until you look over in the distance," he said.

Mr Grage hoped the weather gods would bring some much needed rain.

"Hope for this week is to go home ... the other hope we have is it rains at the weekend," he said.

He said their four chickens were doing fine and had eight eggs waiting for them yesterday.

Mrs Grage said she wanted to get back to the comfort of home.

"You don't realise how much you do miss your home when you're out of it," she said.

She said she felt she was in limbo.

"I've had enough excitement for now."

Overall, more than 80 households still cannot return for good because of the fire danger.